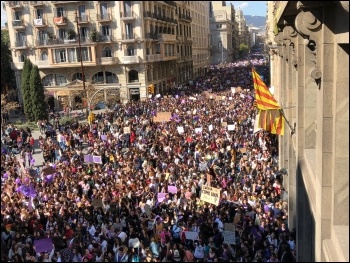 We've made history again! Millions were on the streets against sexist violence and capitalist oppression.

But we have done it again! Millions of working class women have taken another firm step forward, supported by hundreds of thousands of our colleagues, and we've organised another day of strike that will undoubtedly be written in the history of the social and political struggles of the Spanish State in capital letters.

In the morning, the mobilisations organised by 'Sindicato de Estudiantes' (Students' Union) and 'Libres y Combativas' (Free and Combative) were overwhelming: 2.5 million students on strike, and more than 400,000 in the dozens of demonstrations that we organised around the whole state.

In the afternoon, in the unitary feminist mobilisations, participation went way over the most optimistic forecasts: close to 5 million workers, with hundreds of thousands of supporters at our side, provoked a tsunami that has unleashed a deep concern in the ruling class.

There were many signs that preceded the explosion we have experienced, beginning with the reality of oppression, exploitation and violence against working-class women that has not been solved despite the "feminist" rhetoric of the PSOE government, which has become a real rage against patriarchal justice and the declarations and provocations of the reactionary and Francoist political block - the Popular Party (PP), Ciudadanos (Cs) and Vox.

The social pressure has been of such magnitude that the leaders of the workers' unions - CCOO and UGT - have not been able to enforce the policy of social peace that they have been practising in these past years.

The class struggle and the massive movement of working-class women for their rights forced them to extend their call for a two-hour strike to 24 hours in different sectors, as other workers' unions had already done (CGT, Cobas, CNT, CIG, LAB, ELA...).

From early morning on 8 March, the media had no choice but to highlight the swelling response of the labour strike in which nearly seven million workers participated.

Youth on the front line of battle

The role of the youth on this day became crucial again, as was obvious in the massive student mobilisations that filled streets and squares at 12am throughout the whole Spanish State.

More than two and a half million people emptied the classrooms in support of the 24 hour general strike organised by the Students Union and Free and Combative. More than 400,000 young people filled the demonstrations in the morning!

In Barcelona more than 130,000 students began our march in Plaça Universitat to fill the city centre and more than 6,000 demonstrated in Tarragona.

In Madrid more than 120,000 students took to the Puerta del Sol and blocked the Gran Vía to the Ministry of Justice. 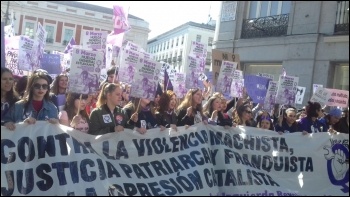 In Bilbao, Gasteis, Donosti and Iruña -in the Basque Country- the mobilisation was huge - tens and tens of thousands, as in Valencia, where 30,000 young people filled the main arteries of the city.

The student demonstrations flooded all corners: tens of thousands in Seville, Malaga, Cádis, Córdoba, Granada, Almería...; in Vigo and in Ferrol, with massive marches of thousands of young people.

In Oviedo, Gijón and other towns in Asturias there were more than 7,000. Thousands and thousands in Saragosa, Illes Baleares, more than 3,000 in Guadalajara, thousands more in Castilla-La Mancha and the same trend in Salamanca and the rest of the cities of Castilla León, in Extremadura, Murcia and in dozens of other cities.

The young students, together with our comrades, merged with millions of workers in this massive mobilisation against sexist violence, patriarchal justice and capitalist oppression.

In all the demonstrations, the slogans were loud and clear: 'Enough of sexist justice!', 'We want to be alive, free and combative!', 'The 'Wolf Pack' is the system!' or 'Long live working class women's struggle!'.

The demonstrations organised by the Sindicato de Estudiantes and Libres y Combativas were so massive, that the bourgeois newspaper El País had the headline on its main article of the morning: "Students lead the March 8th women's protest in the streets".

A human tide in the afternoon demonstrations

The mobilisation of the youth in the morning was only the prelude to what would be the unitary feminist demonstrations held in the afternoon.

And indeed, from the early afternoon, buses, subways, trains and streets of all neighborhoods in dozens of cities were all purple, filled with posters and home-made banners, painted faces, a desire to fight and show strength and determination.

More than five million working class women and young people, along with comrades in the struggle, packed every corner of the Spanish State in the afternoon.

The images speak for themselves. In Madrid, more than a million took to the streets; the same in Barcelona.

Hundreds of thousands in Valencia, Bilbao, Seville, Granada, Malaga, Gasteis, A Coruña, Gijon, Valladolid and in dozens of cities... A human tide filled the demonstrations that was so massive that it was not even possible to walk. 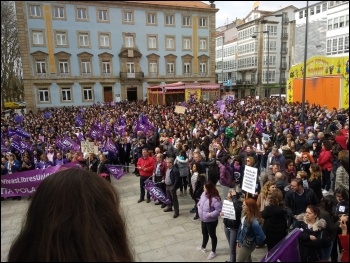 This historic day of struggle has also made clear who the real protagonists of this struggle are. We are the women and girls of the working class who have filled the streets and made the strike a success.

And we are the ones who suffer in a continuous way the oppression of this system, precariousness, low wages, mass unemployment and evictions.

Poor women are the victims of the most extreme forms of sexist violence including prostitution, and the other forms of commodification of our own bodies like surrogate pregnancy.

And it is mostly women and young girls from working families who are killed, raped and mistreated, and whom class and patriarchal justice humiliates with their despicably lenient sentences.

The class composition of the movement once again made the mobilisations stand out, but to an even greater extent than last 8th March.

Once again it was evident what is really the beating at the heart of this uprising. As explained by Libres y Combativas, the Sindicato de Estudiantes and Isquierda Revolucionaria repeatedly, in this great battle for our liberation, not all women are our allies.

Neither Inés Arrimadas from Ciudadanos nor her "liberal feminism" (advocating legalising the most disgusting forms of exploitation and sexist violence against women), nor the female PP deputies, represent us.

It's quite the opposite. They, along with Albert Rivera (Cs) or Pablo Casado (PP), are responsible for the cuts and austerity that hit us, and have not had any qualms about allying themselves with an ultra-rightist formation like Vox.

They share the same Francoist DNA, and they are declared enemies of women who suffer capitalist oppression! The same thing we say about Ana Patricia Botín, that banker who now joins in on feminism but amasses an obscene fortune as a result of the exploitation of both male and female workers.

They are defenders of the capitalist system, of their patriarchal and class justice, and responsible for our oppression as much as their male partners are.

The feminism that we defend has nothing to do with wearing a purple bow on 8th March. The current government of PSOE, which calls itself the most feminist one in history, in practice, has done nothing to end the state of things that has led millions of women to start this rebellion.

They have looked the other way over despicable sentences of patriarchal justice like the 'Wolf Pack' one, they have maintained the social cuts, the labour reform and the wage gap and have bowed before the Catholic church, guaranteeing its privileged position in the education system from which they spread their sexist and homophobic messages.

We know that only putting forward a revolutionary and anti-capitalist feminism, countering the great economic powers and institutions that sustain this system, can we end our oppression.

Clamour against the reactionary block of PP, Cs and Vox. NO PASARÁN!

That's why on 8th March we pointed out very clearly the people responsible for our oppression. We, the women and also the men who blocked the streets across the Spanish State, are very clear about one thing:- this struggle is not only a matter of gender; it is also a matter of class.

That's why the rich - female and male - are allied against us and plan to attack the rights of women and of the working class and youth as a whole, with the clear objective of continuing to enrich themselves at the cost of our exploitation and suffering.

If there was any message that came across in a special way on the 8M mobilisation it was the one we sent to the PP, Cs and Vox. We are very aware of the threat that these elements pose and their aim to return us to the past and end our most basic rights. 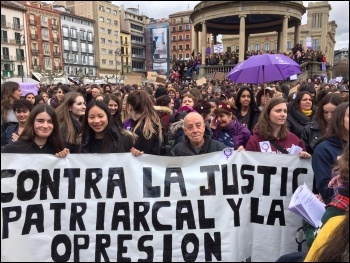 That's why this 8th March has been the best possible answer we could give them: a deafening scream against their Francoist offensive, an example of how to fight and defeat the right and the far right. That is by organising and mobilising in the streets.

This year's mobilisation for International Women's Day reflects not only our enormous strength; it is also a thermometer of the process of radicalisation and turning to the left that is deepening among millions of workers and youth.

This massive form of uprising, which is a historic milestone in the class struggle of the Spanish state and internationally, is also a decisive step to defeat the reactionary bloc of the PP, Cs and Vox in the general election on April 28th.

But it's not just about voting; it's about transforming society, ending the way the system works, achieving genuine liberation and equality, something that we can only achieve with socialism.

From Libres y Combativas, Isquierda Revolucionaria and Sindicato de Estudiantes we call on all students and all workers to continue the battle for our present and our future.

What we did on 8th March was impressive but the fight must continue 365 days a year. That is why we must build a feminism that is separate from the shows of the system, that they cannot assimilate or domesticate: a revolutionary, anticapitalist and class feminism. We call on students and workers to build it with us and join Libres y Combativas!

This version of this article was first posted on the Socialist Party website on 13 March 2019 and may vary slightly from the version subsequently printed in The Socialist.