Struggle for solidarity with refugees must be anti-austerity

Under huge pressure Cameron has agreed to take in 20,000 refugees.

The Hungarian government led by Viktor Orban has been the most vociferous of any EU state in blocking the northward flow of refugees.

Thousands upon thousands of people thronged through central London on Saturday 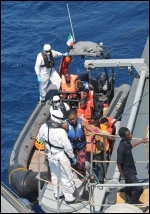 Tamil activist and torture victim Janahan faces horror if he is deported. Defend his right to stay!

Hong Kong refugees won an important victory after more than a year of protests. The hated food packages (with expired and overpriced food) have been replaced by a coupon system enabling greater choice