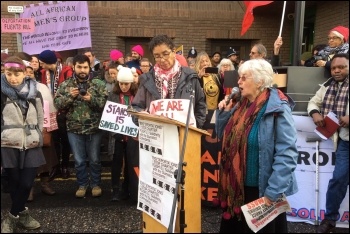 Linda Taaffe addressing the protest outside the court, 6.2.19, photo by Paula Mitchell   (Click to enlarge)

At 10am, the 'Stansted 15' were to be brought before the judge for sentencing, having been found guilty last December for their action in March 2017.

They cut the wire into Stansted airport to delay a plane, paid for by the Home Office to take back 60 deportees - all in fear of their lives - to various countries in Africa.

At the demo there were hours of speakers, singing and dancing. All kinds of organisations pledged support, including messages from trade unions like general union Unite, retail and distribution union Usdaw, food workers' union BFAWU, and the London, Eastern and South East region of the Trade Union Congress.

Waltham Forest in east London, where five of the Stansted 15 live, brought around 60 supporters in our solidarity coach. Eventually the result we'd hoped for, but were fearful of, came through.

The Stansted 15 were initially charged with 'aggravated trespass' - which they had expected, so they were bracing themselves for an appropriate penalty.

However, four months after arrest the authorities changed this to a charge under the Aviation and Maritime Security Act 1990 - introduced after Lockerbie.

In the campaign to develop publicity, get across-the-board support, to spread the word and put massive pressure on the legal system not to hand out lengthy jail sentences to people whose only "crime" was human solidarity, uncovering the reasons for this inexplicable change had to be left on the back burner.

Not only migrants, but all the working class is living in a permanent "hostile environment." With another crash on the horizon, with all kinds of problems like poverty wages and a terrible housing crisis, the capitalists are terrified of even the tiniest protest by groups of workers.

The rich and powerful cannot tolerate any challenge to their right to govern. They are putting measures in place that could be used to the full against the workers' movement at a future date.

This particular Aviation and Maritime Security Act is all about "intention to disrupt." It applies not only to airports but also to roll-on roll-off ferries, shipping, ports, freight and passengers.

So what if airport workers or seafarers went on strike? A strike in and of itself is an intention to disrupt par excellence! Could this be used against trade unions at a certain stage? It's a weapon in the arsenal of the bosses to be used when necessary.

The campaigners in Sheffield who stood in front of trees, destined to be cut down by a private council contractor which deemed them too costly to maintain, were charged with "violence and intimidation" under anti-trade union laws!

And of course, the biggest threat that hamstrings trade unions is that legislation introduced by Margaret Thatcher, left untouched by Tony Blair, and weaponised under David Cameron - who introduced the most draconian legal restrictions on unions in western Europe - all aiming to stop workers striking for decent pay and conditions.

In Waltham Forest, we had had our right to campaign seriously restricted on two occasions. The latest was when local council officers refused to allow the 'Save Our Square' campaign to use a democratic 'official petition to the council'.

This was about the extremely unpopular decision of the planning committee to give the go-ahead for private developers to privatise and block out our town square with a 29-storey tower block - so-called 'regeneration'.

Meantime, the real criminals are getting away with murder. Those who cause tragedies like Grenfell Tower; who devise the 'Universal Credit' system that sends workers to food banks, or worse, to die on the streets; who get away with paying poverty wages; and who are allowed to charge sky-rocketing rents to struggling families and young people.

So let's savour the win of the Stansted 15 in this moment. Well done deportation protesters! But let's prepare to win on the biggest scale ever, to change the system to a socialist society, where everyone would have secure material conditions - like a truly affordable home, a decent paying job, and a well-funded health service.

Such conditions would outlaw subjecting refugees to the current barbaric treatment they suffer - along with removing the profiteers who cause such havoc in everyone's lives!