Tamil Solidarity is at the forefront of protests against this year's Commonwealth Heads of Government Meeting in Sri Lanka, in November, writes Keerthikan Thennavan, Tamil Solidarity joint national secretary.

HOWLS OF outrage greeted the news that the Oxford Union debating society had invited Sri Lankan president and suspected war criminal, Mahinda Rajapaksa, to address it on 1 December...

AS PART of an international day of action, Tamil Solidarity organised a protest outside the Indonesian embassy in London on Friday, writes Manny Thain. 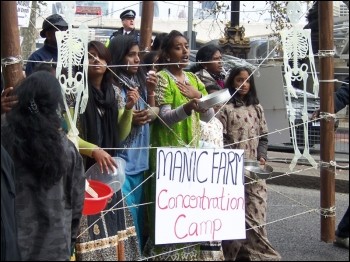 DISGUST AT the inhuman treatment of hundreds of thousands of Tamils held under armed guard in open prison camps in Sri Lanka brought tens of thousands on to the streets of London on 17 October, writes Manny Thain.

TAMIL PEOPLE have begun mobilising again with the first of weekly Friday protests outside Downing Street in response to the horrific conditions in internment camps in Sri Lanka, writes Manny Thain.

Sri Lanka: "THERE ARE no minorities in this country," Sri Lankan president Mahinda Rajapakse declared on 19 March, after his army killed over 20,000 Tamil people and imprisoned 300,000 in World War Two-style camps...

The guns fall silent - but no peace for Tamils

OVER 70,000 mainly Tamil demonstrators marched through London on 20 June, angered by the continued misery of the Tamil people following the Sri Lankan government's military defeat of the LTTE (Liberation Tigers of Tamil Eelam). 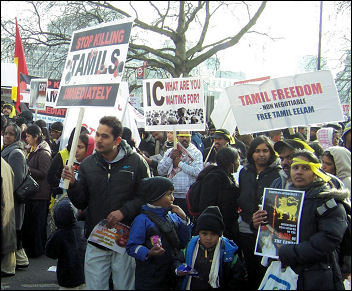 Massive demonstration in London against ther military attacks on Tamils in the north of Sri Lanka, photo D. Carr

STOP THE Slaughter of Tamils (SST) campaign followed up on the massive national demonstration against the war in Sri Lanka on 11 April with a public meeting in central London, writes Manny Thain.