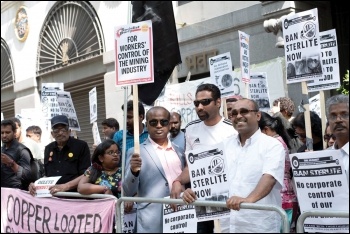 On 26 May Tamil Solidarity organised a protest outside the Indian High Commission in London to condemn the Tamil Nadu and Modi governments for the killing of 13 people on a peaceful protest in Thoothukkudi, Tamil Nadu. Over 300 Tamils along with their families participated. The protest was supported by the Socialist Party and Socialist Students.

The police shootings took place on 22 May outside the Sterlite Copper plant, owned by Vedanta Group, when thousands marched against the expansion of the environmentally damaging site.

At the start of the London protest candles were lit to mourn for the innocent civilians who were shot dead by state police.

On our leaflets Tamil Solidarity put forward ten demands to the Tamil Nadu state and central government. These include closing down Sterlite industries permanently - the temporary closure announcement is not enough - along with provision of adequate aid and jobs for all the workers.

We also called for the immediate release of all arrested protesters and the dropping of all charges against them.

Further, we demanded the urgent convening of a democratic, open and accountable investigation into the killings and atrocities committed by the Tamil Nadu police. The inquiry should be led by the representatives of workers and victims. We demand justice and adequate compensation.

The management of natural resources must be brought under democratic popular control, including democratically elected workers' bodies. It is only through such action that we can protect the environment from corporate damage and protect human lives from harm.

Representatives from other organisations at the high commission protest, including the Socialist Party, also condemned the brutal shootings. At the end of the protest, the accusations against the governments and support for the people of Thoothukkudi were sung as song.