Over 40 sparks and their supporters assembled outside the Crossrail site opposite Westbourne Park tube station in London this morning...

Around 70 rank and file construction workers met in Manchester on 17 March to discuss the victory against the bosses' attempt to impose Besna contracts - cutting wages by up to 35%...

National Shop Stewards Network: Over 40 construction workers protested on 14 March outside the Shard site at London Bridge. These workers were fresh from the victory over the 'Dirty Seven' construction companies

The Trades Unionist and Socialist Coalition has called for firms that used information to blacklist trade unionists and academics, to be banned from public sector contracts. 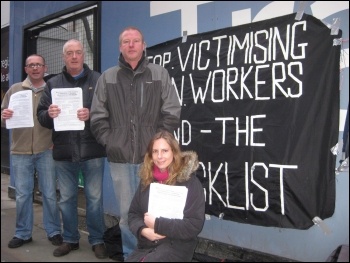 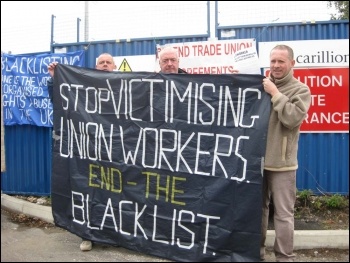 Electricians to protest on 1 February in Manchester

Manchester electricians fighting the new Besna contracts because of pay cuts and deskilling, are appealing for a huge turnout on Wednesday 1 February from 7am at the town hall/central library site, writes Hugh Caffrey.

Exposed - the dirty world of the construction blacklist

A London Employment Tribunal has found that engineer Dave Smith had been blacklisted by Carillion (JM) Limited and Schal International Limited (a wholly owned subsidiary of Carillion) because he raised concerns about asbestos on building sites and because of his trade union activities... 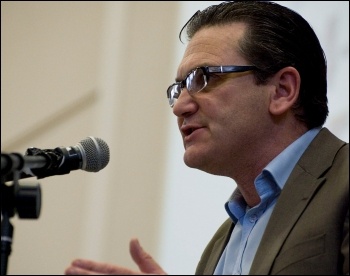 Mick Dooley, barred from standing for UCATT general secretary after he exposed previous election to be illegal, photo by Paul Mattsson

An interview with Mick Dooley 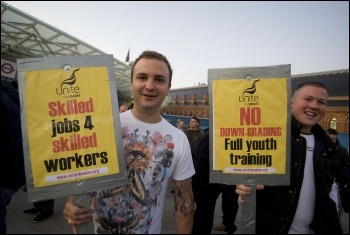 Getting organised for action: Up to 100 construction electricians from across the north and north-west met in Manchester on 1 October to organise in defence of pay and conditions, writes Hugh Caffrey.

Electricians took the fight to defend their wages and conditions to London's Oxford Street this morning. Workers have also been protesting in central Manchester, Tameside and Liverpool

Blacklisted electrician stands his ground on right to protest

After two years of harassment against blacklisted electrician Steve Acheson, Scottish and Southern Electricity (S&SE) has backed down...

A lively and sizeable protest of trade unionists brought movement of vehicles onto the Olympic site in East London to a halt on 1 March, writes Greg Maughan. 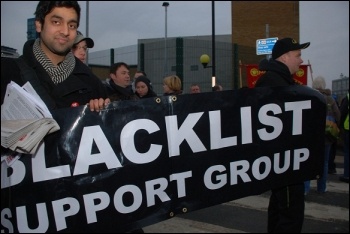 The fight against the building blacklist

Construction workers in the greater Manchester area have launched a campaign against blacklisting in the industry, writes Christian Bunke.

Battling against the blacklist

Manchester electrician Colin Trousdale wrote this diary to illustrate the effect of the blacklist clearly being operated by some construction employers, writes Wednesday 13 May.

I was given a job by the Shaws group at Lindsey Oil Refinery (LOR) as a rigger nine months ago. But when I reported for work I was not allowed on site by the client Total, the owners of LOR. No reason...