The coronavirus epidemic has highlighted how important health and social care staff are in caring for some of the most vulnerable, and keeping society running, writes Jack Jeffery, North London Socialist Party. 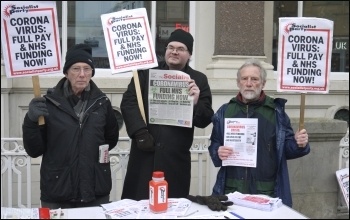 Joby Sparrey died on Christmas Day in the doorway of a shop in Malvern, Worcestershire. Brays is a long-established shop with large doorways so he was probably able to stretch out to sleep.

600 homeless people died in 2017 in England and Wales. If people can't afford to rent, then rents should be capped, controlled and cut.

Housing in Britain is in crisis. Bailiffs were called to a house in Hove on 26 October after the tenant - struggling to get by on Universal Credit - fell into rent arrears.

Quick, look rich - the royals are coming! Yet again the homeless of Windsor were moved on in preparation for another royal wedding on 12 October.

Lawyers from the Public Interest Law Unit (PILU) have submitted a formal complaint against St Mungo's, one of the leading homelessness charities in the UK, for its work in colluding with the Home Office to illegally deport homeless EEA (European Economic Area) nationals

Do you have something to say? Letters to the Socialist's editors. Blairite councillors attack homeless; universal credit protest; tide is turning on anti-cuts fights

Royal wedding homeless clearance: The Tory leader of the council, Simon Dudley, decided the police needed to get rid of homeless people using the Vagrancy Act of 1824

No charges to residents! Cladding off now!: Residents in the 'Citiscape' housing complex in Croydon, south London, have learnt that tests revealed the cladding on their block poses the same fire hazard as Grenfell Tower.