What policies are needed to end domestic violence?

A spirited and determined 'Reclaim the Night' march, organised by and for women, wound its way through the Saturday night revelry of Nottingham city centre

In Yorkshire, Socialist Party members have been organising with others under the banner of 'Women's Lives Matter'

The election of Donald Trump is a call to action for women. His glorification of sexual assault is an insult to the courageous struggles over the last years to combat violence against women

Confusion, soul-searching and outright horror. These words could accurately describe the response of the establishment press and political figures, world over, to the growing support for Bernie Sanders

End violence against women: On 20 May, Jaffna in Sri Lanka came to a standstill, with shops being shut and black flags raised in memory of Vidya Sivaloganathan, the 17-year-old A-level student brutally gang raped and murdered

'Power to the women' was the slogan of a lively, loud march through central London 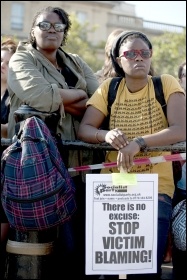 Under capitalism the stereotypical representations of women which abound in the media, advertising and general culture have their roots in the rise of class society, wrote Christine Thomas in her book 'It doesn't have to be like this: women and the struggle for socialism'