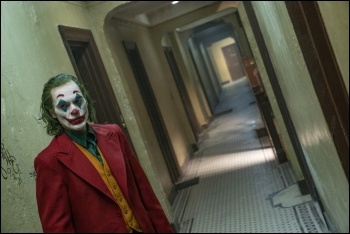 However, it echoes the incendiary economic and political situation of today. Tension and frustration build among working-class people against their conditions portrayed in the movie.

Poor-quality housing, rising crime, poverty, cuts to mental health services, uncompromising bosses and increasing civil unrest are abound and help shape the Joker's character. What makes the movie so compelling is that it holds up a mirror to the realities of austerity faced by the viewer.

A perfect storm develops. Cut off from psychiatric help due to cut services, mixed with the instability of precarious working conditions.

This is topped off with an incident, subject to the cruelty and entitlement of what effectively represents the capitalist class, causing Arthur Fleck (Joker) to snap. An act of extreme violence against those representing big business strikes a chord and sets off a movement.

At times the Joker not only comes across as sympathetic but often relatable. What makes Joaquin Phoenix's Joker so terrifying is that he isn't overblown and cartoonish but realistic and entirely plausible.

We can relate because it is very clear that the capitalist system is laid bare, shown for all of its failings, a stark contrast between the haves and have nots. Where that relatability ends is in the action the Joker takes to strike back against the system, manifested in part due to his developing psychosis.

We the audience empathise because we too want to strike out against a system that is so utterly broken. Where that empathy ends is seeing that action being translated into what can only be described as terrorism through the actions of the Joker.

At the end of the movie we're left with an uneasy feeling of both sympathising with the tragic creation of the Joker, while being horrified at the monster that's created out of the monstrous conditions which we also inhabit.

Joker reflects the rotten system we live in and serves as a stark warning to the kind of ideas that might flourish if we allow that system to continue. It's certainly worth a watch.