The UK's public broadcaster, the BBC, is facing renewed threats to funding and jobs. James Ivens looks at how the workers' movement can defend employment - and overcome the establishment media's anti-worker propaganda.

See also 'Is the BBC worth saving?' in the March issue of Socialism Today - read and subscribe at socialismtoday.org 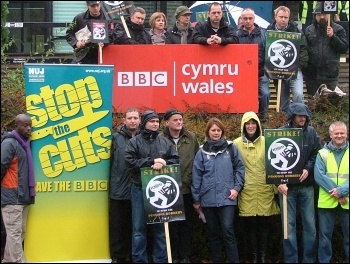 How can BBC jobs be saved?

Management at the BBC plans to scrap over 500 news jobs. High-profile targets include reductions at Newsnight and 5 Live, but cutbacks will hit the whole division. The Victoria Derbyshire show, for example, is to be cancelled outright. Scandalously, workers on the programme had to find this out through a leak to the press.

This latest 'restructure' has been looming for some time. Its announcement was due last year and delayed by the general election. But the funding deficit arising from reforms to the licence fee system and market changes goes back years.

The main unions involved are the National Union of Journalists (NUJ), and Bectu (now part of Prospect) which organises technicians and other staff. The NUJ has slammed the latest licence fee settlement. Bectu is consulting members on redeployment.

But union members may well ask: with management seeking £800 million of 'savings' across the whole BBC, will an internal move secure my job? And what if I want to keep my current post?

The unions must argue for industrial action as the best hope for saving jobs. It's true that senior journalists at the Beeb tend to come from more privileged social backgrounds. But the lecturers are out; even the junior doctors struck in 2016; and many BBC workers are low-paid as well.

Plus the Beeb is no stranger to strikes. Funding, outsourcing and staffing have been flashpoints under both Blairite 'New Labour' and Tory governments.

In 2004, then director-general Mark Thompson announced one in five jobs would go - a total of 3,780 - mostly through voluntary redundancies. This was a part of New Labour's programme of privatisation and selective cuts. The NUJ, Bectu and Amicus (now part of Unite) struck for 24 hours in May 2005.

The NUJ struck for two days against pension cuts in 2010. Bectu had accepted the deal. Staff faced losses of between £10,000 and £100,000 to their pensions. The attack (and strike) foreshadowed the general struggle against Tory pension cuts in the public sector in 2011.

In 2013, NUJ and Bectu members walked out together for 12 hours. This was against the 2,000 redundancies and management bullying resulting from 'Delivering Quality First' (DQF) cutbacks.

Each time, management was forced to replace flagship scheduled content with recordings or even re-runs, so the NUJ and Bectu do have real power. But short one-off strikes did not prove enough to stop the attacks.

The lesson is therefore that more concerted action is necessary to wring concessions from management. A programme of longer, escalating strikes could draw more BBC workers into the struggle until management makes a real retreat.

As a first step, union leaders should call mass meetings at the BBC to discuss demands and start explaining the need for bolder action. That would give confidence to members that their union is ready to lead collective action - and warn employers to think again.

This would also be a fight for the whole BBC. Its commercial arms - production company BBC Studios, facilities company BBC Studioworks, and BBC Global News Ltd - could have particular power. Media unions more widely have a vested interest too.

After all, the cuts do not begin and end with BBC news. An NUJ victory here would have repercussions for jobs across the entire broadcaster and wider media.

Should we defend the licence fee?

A fight can save the jobs. But without funding to back it up, this will only be a reprieve. So if the context of losing funding is the problem, the answer is not to accept the context.

BBC unions are right to point the finger at the licence fee settlement as underlying the present crisis. In fact, attempts to undermine BBC income - and the state broadcaster's authoritative position in Britain's media landscape - date back to Margaret Thatcher.

More recently, David Cameron's "bonfire of regulations" led in 2015 to the Deregulation Act and David Perry QC's review of the licence fee. The Perry Review surprised neoliberal politicians, and not for the first time, by recommending the fee stay.

Cameron's government took some of the licence fee for local stations as well as TV and broadband infrastructure, but nine-tenths goes to the BBC. In 2018-19, this meant £3.7 billion for the Beeb, with commercial arms bringing in a further £1.2 billion.

Now, the Tories have stopped subsidising licence fees for over-75s not in receipt of pension credit. They have also announced plans to decriminalise non-payment of the licence fee. Both will cost the BBC hundreds of millions.

The government knows it will face enormous public anger at some stage. The BBC's proposed cuts in investigative and local news teams would make it an even more compliant establishment mouthpiece. Some Tories also want to force the BBC to become an online subscription service so that profit-making media firms can fill the resulting gap.

In fact, the government may not be unified on how to attack the BBC. The Times reported on 18 February that Number 10's top advisor Dominic Cummings wants the licence fee abolished on "ideological" grounds.

However, Boris Johnson himself reportedly wants "reform rather than revolution." And the minister in charge of that reform, John Whittingdale, considers the Netflix model "politically utterly impossible" - not least because older voters who are not on broadband rely on public broadcasting. Meanwhile, earlier cuts closed departments like BBC3, leaving little catering for the net-savvy 16-34 demographic.

BBC unions, with the support of the wider trade union and labour movement, can and should exploit any divisions to press their demands. But does that mean defending the licence fee itself?

For a start, it is a compulsory, flat-rate household charge for anyone who watches live TV or BBC iPlayer. In effect it is a regressive tax. For this reason alone it should be replaced - with funding from general (progressive) taxation.

The entertainment and media unions have traditionally backed the licence fee as stable, ring-fenced funding that it's harder for the government to cut. But years of attacks and the latest developments show this is no guarantee.

The answer is not to defend regressive taxation, but to strike and campaign for the necessary money. Johnson says austerity is over - demand he replace licence fee losses with central funds!

And would a subscription model work anyway? The current £154.50 licence fee works out as £12.88 a month, of which almost half pays for non-streamed services, including radio, orchestras, news and the website.

Market leader Netflix charges just £5.99 to £11.99 a month and doesn't have to fund any of that. Meanwhile, the main competitors - Amazon Prime and Apple TV - are backed by multibillion-dollar tech giants. This doesn't look like a sustainable option.

BBC staff will understandably welcome any concession that shores up their funding. But clearly neither the licence fee nor subscription is a long-term solution.

And why should workers have to pay? Public broadcasting is a public service. It should be free for all at the point of use. But it also needs to be under genuine democratic control.

Isn't the media a barrier to achieving socialist change?

During the years of Jeremy Corbyn's anti-austerity Labour leadership, the BBC joined with the capitalist-owned press in vicious slanders against the left. This reached a high point in the run-up to December's fateful election.

But the idea in some parts of the left that the capitalist media caused the defeat is wrong.

Of course it was a factor. But the bosses have always employed lies and propaganda against the workers' movement - sometimes even worse than this. Left-wing governments and revolutionary movements have nonetheless broken through.

In previous articles, the Socialist has explained that two of the main reasons for Labour's defeat were its Brexit position and continuation of Tory cuts in local councils. These and other mistakes gave some credence to the hypocritical attacks on Corbyn. Even quite spurious press smears and talking points can end up in wider circulation as a distorted but ready way of expressing a deeper class anger and political dissatisfaction.

The BBC, of course, is well-known for its pro-establishment bias. Its political editor, Laura Kuenssberg, is a notorious defender of the right and opponent of the left. Its one-sided coverage of the Israel-Palestine conflict is infamous. The list goes on.

The BBC does sometimes critique the government and report on uncomfortable facts for the bosses. But it is ultimately no more than the media outlet of Britain's capitalist state. Just like the courts, police, army and senior civil servants, it is part of a machine designed and led by representatives of the capitalist class, and in a pinch will always defend capitalist interests.

However, cutting news workers and weakening their unions will only make the situation worse. Journalists so inclined will have even less time and power to investigate, challenge official statements or stand up to editors.

Perhaps ironically, the BBC's institutional backing for the capitalist establishment could even create some complications for uniting public support in its defence. Bold industrial action can overcome this by showing that BBC staff are prepared to fight the government and defend public services.

Such a struggle can also have a political effect on the BBC. Workers who have stood up for themselves are less likely to accept editorial diktats. And a more general rise in trade union militancy can act as a social pressure to force the media to give space to the actions and views of the workers' movement.

Socialists fight for every possible reform that makes it easier to organise workers and argue for our ideas. But that doesn't mean we can rely on institutions owned or controlled by the class enemy to do the job for us - and that includes the BBC. The workers' movement must establish its own independent mass media to counter the bosses' omissions, distortions and lies.

Overcoming the impediment of the capitalist media is only possible by organising workers' struggle and socialist political campaigning. Yes, for reforms to weaken the established media as a tool against the working class. But also for the trade unions and workers' parties to build our own mass media that can finally be a tool for the working class.

And the goal the workers' movement and media must set for the media as a whole is genuine freedom of the press: breaking the capitalists' control. Nationalise the mass media - under the democratic control not only of media workers, but the wider working class.

Allocate democratic access to public print and broadcast resources to all groups and trends of public opinion in fair relation to their size. And guarantee space for minority and experimental projects. A BBC which was part of this framework might finally become a public broadcaster worthy of the name.