From: The Socialist issue 933, 25 January 2017: Organise to beat Trumpism, austerity and capitalism 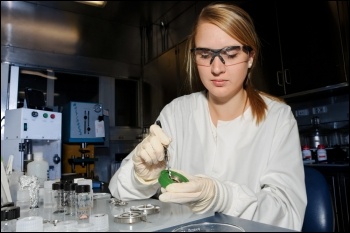 A socialist plan would allow a surge forward in science, technology and medicine, photo US Army RDECOM (Creative Commons)   (Click to enlarge)

In many ways capitalist competition is a lie. Just look at the huge monopoly on the mobile phone market held by Apple and Samsung between them. And for the last 15 years those two companies have been waging legal battles over patent infringements as they continually copy from each other.

They are able to 'compete' partly because they can cope with the costs of such legal battles - amounting to billions of dollars. So it seems it's the ability to enforce cooperation and the sharing of information, rather than freedom of competition, which creates the best mobile phones!

And individuals are not equally free to compete and achieve either. Those with money - and the education, health and networks that come with that - have more than a step up on those with less. If anything, socialism would in fact balloon the 'competition' because huge numbers of those who previously had no chance of reaching their full potential would be able to.

After all, it's not companies that further things but people. And people who are well fed with nutritious food, well educated in reasonably sized classes, and not constantly stressed by the possibility of losing their home or job, are much more likely to be able to achieve great things. All of those things would be offered by a socialist plan that put need before profit.

Most people would instinctively recognise that the most efficient way of pursuing any scientific advance is by pooling all knowledge and expertise in the field.

Instead, we have ten different companies which have worked out one piece of the puzzle and then desperately try to keep it secret from the others. Nowhere is this clearer and more perverse than in the pharmaceutical industry.

Scientists have warned of an approaching 'antibiotic apocalypse' because of growing resistance to the drugs. It has been 30 years since the last new class of antibiotics was released - because big pharma can't see a profit in research and development. No progress there, despite plenty of capitalist competition.

And sometimes the deadly role of the industry goes much further. In 2001, 39 companies took legal action against South Africa to stop the government importing cheap versions of patented antiretroviral drugs at the height of the HIV/Aids crisis in the country.

So in fact competition between private profit-hunters holds back human development. Socialism, in contrast, is the only way to allow it to blossom.

Human beings have always striven to understand more about our world, to test ourselves and to improve our lives. Long before capitalism existed people looked up to the stars and wanted to understand, built mechanisms to create more food and to make their homes safer, created new and improved ways of communicating, and so on.

In a socialist society - one which takes the majority of the economy into public ownership and democratically plans production to meet the needs of the population - these kinds of achievements would benefit humanity as a whole, not just those with the greatest means.

People could still be proud of themselves and those they know, have a profile as the one who solves a certain problem or is best at something, and be rewarded for that.

Why do we need hundreds of brands of washing powder that do the same thing? A socialist plan could produce one range of washing powders which people decide are best at the job and least damaging to the environment. 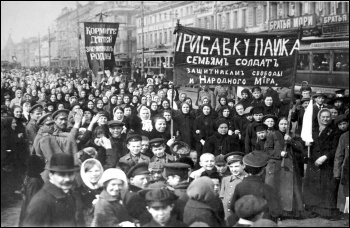 Consider the impact of the 1917 Russian revolution. Russia was an economically backward country - the majority of the population lived in the countryside and could not read or write, they were ruled over by neo-feudal landlords in a system of inefficient small scale farming.

And yet just 40 years later - a micro-second on the scale of human history - the Soviet Union beat the US to launching the first satellite into space. A planned economy, even with the huge distortions and limitations of the Stalinist bureaucracy, was able to massively speed up the 'progress' of that area of the world.

This also partly explains why most of the biggest advances in recent history have actually come through research and development by public institutions rather than private companies.

The World Wide Web, for example, was created by Tim Berners-Lee while working at Cern (European Organisation for Nuclear Research) - a facility funded mainly by EU governments.

GPS technology was developed by a group of scientists working for the US Department of Defense. Of course these public achievements aren't used effectively for public good but instead are exploited by the private sector to boost its profits.

Technological advances should make jobs easier and working hours shorter, not increase unemployment and inequality. Only a democratic socialist plan can offer that future.