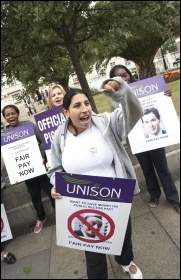 Austerity works - unemployment is falling and wages are rising: that is the pre-election mantra of the Tory Party. Of course, if it were true, millions of workers would be breathing a sigh of relief that seven years of misery are finally drawing to a close. Reality - however - does not match the hype.

For the majority there is no sign of wages increasing. Yes, average wages were 2.1% higher in the last three months of 2014 than a year earlier. But that was only as a result of including the bonuses of the bankers and the few others who receive them! In reality average incomes have still not recovered from the effects of the 'Great Recession' and are 2% below their previous peak.

The picture is much worse for young people, whose wages today are around 8% lower than they would have been in 2007. Over the last six years, workers have suffered endless austerity. Poverty, hunger and destitution have returned on a level not seen since the 1930s.

And while the number of jobs may have increased, these are overwhelmingly 'McJobs'. Britain now has 4.5 million self-employed workers, more than any other country in western Europe. Most are self-employed because it is the only option available. The future facing the next generation is low-paid, insecure work. Even these jobs are centred in London and the South East - where the wages paid aren't enough to rent a cupboard, never mind a flat. Buying a home is totally ruled out for the majority - the average age of a first-time buyer in London is now 52!

Nor has austerity lowered the deficit as the Tory-Lib Dem coalition claimed it would. Osborne predicted it would be £37 billion in 2015; instead it is well over £80 billion! Of course, this will not prevent the next government continuing with austerity, whoever wins the general election. The Tories are planning to annihilate much of the public services that have survived the last five years, but Labour has also repeatedly made it clear that it too would continue with cuts.

What lies behind the drive for austerity is not simply deficit reduction, but British capitalism's aim to increase its own profits. Under the cover of the economic crisis an attempt is being made to dramatically lower the share taken by the working class - if they can get away with it, down to pre-war levels. This is not only about holding down wages, but also decimating the 'social wage' - public services. At the same time, the capitalists hope that the privatisation of public services, particularly the NHS and education, will provide new investment opportunities.

A section of big business recognises the dangers of offering only endless poverty pay for workers in Britain, and has even been toying with an increase in the minimum wage. This partially reflects awareness that an increase in incomes would increase the market and therefore improve prospects for economic growth. But it also reflects a fear that the working class - seeing the vast wealth at the top of society - will rise up to demand a living wage.

They are right to fear this. We can already see the first signs of such a revolt, for example, in the tremendous battle of London's bus drivers to demand that their wages are 'levelled up'. Only by getting organised - both in the trade unions and politically - will it be possible to win significant wage increases from big business. It is one thing for some capitalists to recognise the general economic benefit of an increase in wages, quite another for individual employers to cut across their own profits by raising their workers' wages.

Beyond the general election the central struggles facing the working class will be the battles to increase pay and to stop public sector cuts. Maximising support for the Trade Unionist and Socialist Coalition's election challenge can play an important role in preparing for those crucial struggles.

Osborne's claim that Britain's economy is returning to healthy growth is laughable. He can only make the claim at all because of the fall in world oil prices. This has multiple causes not the least capitalists' fear of a further slowdown in the world economy. In the short term, however, the fall in oil prices can slightly ease the strain on the bank balances of workers in Britain. But even in the short term this is only one side of the story. The jobs of many of the 450,000 workers in the oil industry in Britain are now at risk.

Despite the vast sum - £375 billion - that has been pumped into the British economy via Quantitative Easing, levels of investment remain at a historical low. Far from the promised 'march of the makers', British manufacturing remains exceptionally weak. The productivity gap with other major economic powers continues to widen - output per hour is 16% lower than if the pre-crisis trend had continued.

What growth has taken place in the UK economy is based overwhelmingly on increasing the exploitation of the working class, and re-inflating the credit and housing bubbles. In November, consumers took on the highest level of new debt in seven years. To a far greater degree than before 2008, borrowing is being used not just for new purchases but as a means to make ends meet.

Whoever wins the election, a new phase of the economic crisis will be on the agenda at a certain stage. This could be triggered by international events, such as the crisis in the Eurozone, but also by a new financial crisis in Britain.

The increasing inability of capitalism to meet the most basic needs of the majority - a home and a reasonably paid job - is beginning to raise the need for a different kind of society. The ideas of socialism will be put on the agenda.

A crucial step towards solving the economic crisis would be to take into democratic public ownership the 125 or so big corporations that control around 80% of Britain's economy. This would provide the possibility of developing a democratic, socialist plan of production that could very quickly transform the lives of millions.