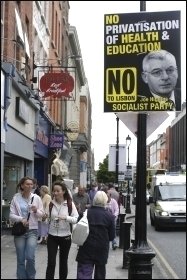 A SIGNIFICANT two-to-one majority in the Irish republic, on a higher turnout, passed the Lisbon Treaty on 20 October, overturning the decision of the Irish electorate in June 2008.

It is clear that the economic crisis served to shift opinion across the board to a yes vote because people felt that passing the Treaty might boost Ireland's prospects for economic recovery.

Last year, Lisbon was rejected because people feared the consequences of the changes it brings to the European Union (EU) and because of a distrust of the political establishment. For a majority this time around the actual Treaty and its contents were secondary to the economic crisis.

In a well-prepared and financed campaign, the political and business establishment left no stone unturned. There was the carrot of "Yes to jobs" and Yes for "Recovery" but then also the stick - threats that a rejection of the Lisbon Treaty for a second time would lead to economic disaster.

As Socialist Party MEP Joe Higgins commented, fear was at the heart of the Yes campaign. The idea was spread that the chief executives of the hugely profitable multinationals were at Dublin airport with their suitcases packed ready to flee in the event of a no vote.

In company after company bosses intervened, by email and directly with their workforces, calling for a yes vote. Any pretence of balance in the media was ended and in the last week of the campaign 65% of articles on Lisbon argued for a yes vote with only 15% supporting the no side. 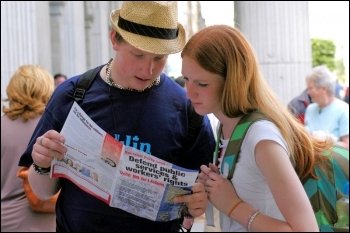 Reading the Socialist Party's leaflet during the 2008 referendum in Ireland, photo Paul Mattsson   (Click to enlarge)

The yes campaign played up the idea that a rejection of Lisbon for a second time would sideline Ireland in the EU and the idea of a two track EU with Ireland on the outside was pushed by government ministers. Given that more than 70% of people believe that Ireland is economically better off in the EU, plus their fears that the economic crisis would worsen, it is understandable that a majority decided to vote yes.

Ironically, the people who caused the economic crisis - big business and the capitalist political establishment in Ireland and the EU - were actually able to use the crisis to get Lisbon passed. 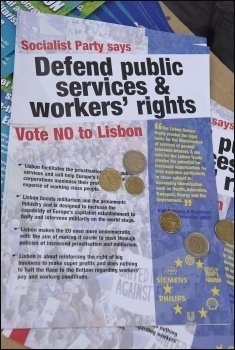 Socialist Party leaflet campaigning for the no vote in Ireland in 2008, photo Paul Mattsson   (Click to enlarge)

There are some parallels with the vote in the 2007 general election. Then, a significant portion of people voted for the establishment party Fianna Fail, in the absence of any real alternative, in the hope that voting for the same government would help maintain economic growth.

Fianna Fail's support has fallen through the floor since then, to historic lows. Now, in a complete reversal of that election, more than 80% disapprove of this hated government. Likewise the basis of this yes vote will disappear.

This will turn out to be a pyrrhic victory. Lisbon won't aid any economic recovery in Ireland or Europe. In fact it will be used to make ordinary people pay a very heavy price for the crisis in the years ahead. The lie about economic recovery combined with the bullying methods of the yes campaign will come back to haunt the establishment and will deepen the anger in society.

It is clear from the figures that in middle class and more wealthy areas, support for Lisbon was 90% plus.

In contrast, amongst working class people the vote was more evenly split but in many areas large majorities, once again, rejected Lisbon. Working class people who voted yes did so with little enthusiasm and without in any way diminishing their opposition to the government.

In terms of the treaty itself, the biggest single issue in the campaign was probably workers' rights. This reflected the opposition to attacks on jobs, pay and conditions but also is a compliment to the role of the Socialist Party and in particular our MEP, Joe Higgins. Joe was the clearest and most effective leader of the no campaign.

The Socialist Party fought a very strong no campaign with thousands of posters and over half a million leaflets, on the issues of workers' rights, democratic rights, defence of public services and opposition to militarism.

Whatever effect that the Lisbon result has in strengthening the hand of big business can be overcome by mobilising the power of the working class against the attacks on jobs, pay and public services.

Out of the inevitable struggles in the months ahead, the need for a real alternative to the crisis and capitalism will become much clearer to many people and will create huge opportunities to build support for a socialist alternative.