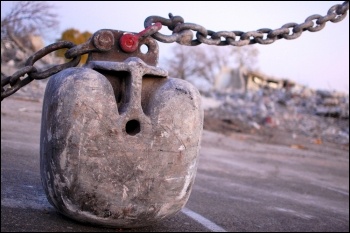 A Dickensian world of slum housing, overcrowding, soaring rents and the threat of eviction is now becoming the reality for millions of ordinary people in Tory Britain.

But this is just a foretaste of what is in store if the Tories' Housing Bill becomes law. Sell-offs, rent hikes and shorter and shorter tenancies will be rolled out.

Neither council nor housing association tenants will be immune. According to the former head of the civil service, Lord Kerslake, social housing itself is threatened. Largely unaffordable 'starter homes' will replace it, at a cost of up to £450,000.

In reality, establishment politicians have been attacking social housing since 1979. At that time 42% lived in council homes. Now it's under 8%.

For millions of people, particularly young people, getting a roof over your head means struggling in the jungle of private renting. Already, in London and other hotspots, the boom in property prices has meant a bonanza for investment companies and private landlords - including many MPs - but a nightmare for ordinary working people.

Unscrupulous landlords are driving up rents at their fastest rate for four years. Meanwhile wages stand still and benefits are capped.

Property developers eye up council estates in areas with market potential if socially cleansed. Evictions and homelessness have multiplied.

The 'London clearances' have already pushed 50,000 people out. Hundreds of thousands more live in fear of losing their homes.

But a massive groundswell of resistance is building from below.

Council, housing association and private tenants all face the same issues, caused by the anarchy of capitalism.

Even many homeowners, particularly leaseholders convinced into buying their council homes, find themselves trapped through spiralling service charges and mortgage repayments.

The rich have no interest in ensuring provision of affordable housing. The enemy is the super-rich 1%, the bankers - and their kept politicians who preside over this system.