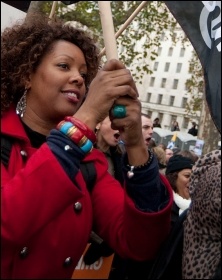 The G20 summit: US politicians blame the eurozone for the unfolding major crisis in the world economy. Eurozone politicians blame the US. Tory Chancellor George Osborne blames everyone else. Starkly exposed is the fact that not one of the world's leaders has a clue about how to end the spiralling crisis of capitalism.

But across the world the 99% continues to fight back - and increasingly that includes searching for an alternative to the capitalist system itself. This was reflected in the standing ovation received by Socialist Party member Tony Mulhearn, a candidate in May's mayoral election in Liverpool for the Trade Unionist and Socialist Coalition, when he addressed the manufacturing conference of the GMB union. Here we carry extracts of his speech:

Without doubt the trade union movement is facing its greatest challenge, attacked on all fronts by a Con-Dem government mired in sleaze and corruption.

This government is reeling from the latest round of Murdoch revelations. Tory culture secretary Jeremy Hunt has been exposed as Rupert Murdoch's inside man at the very heart of government. Murdoch, the great advocate of austerity, up to now has been running a shadow state.

This is further confirmation that this government is the handmaiden of the wealthy and powerful. Millionaire Osborne expresses shock having recently discovered that his rich friends are avoiding paying tax!

They say the cuts are necessary as there is no money left. That is the falsehood belched out by the media day after day and by leaders of the three main political parties. The reality is there is a £120 billion gap of evaded, avoided and uncollected tax. There is some £750 billion of unused capital lying in the banks.

Remember Osborne's prediction of a "march of the makers" where manufacturing would bring growth back to Britain's economy and where redundant public sector workers would find work in the private sector. Well, a GMB study has shown 3,400 manufacturing jobs are being lost every week on average.

The same Osborne promised at the beginning of 2011 that an economic revival was underway.

In a recent speech (19 January) Cameron promised new legislation, which he claimed would make it easier for people to set up cooperatives and small businesses. This is part of his scheme to get "more people engaged in a genuinely popular capitalism". He wants "an ownership society". He wants a nation of shareholders, savers, and homeowners - as well as new entrepreneurs - who will enjoy the "success of capitalism". 'Fairness' is the slogan of the day. How credible is this coming from a cabinet of Con-Dem ministers where 18 out of 23 are multi-millionaires.

Their personal wealth reflects the huge inequalities of income and wealth in British society. This is exemplified by the fact that the share of net income received by the top 1% was 4% in 1978, this has risen to 10%. In 1974 the share of national output going to wages was 64%. Now this has dropped to 54%, the working class is £100 billion a year worse off.

These changes reflect both the trends in capitalism (de-industrialisation, casualisation of the workforce), and the policies of successive governments: a financial free-for-all through deregulation, huge tax cuts for big business and the wealthy, and an assault on trade union rights.

Incredibly, Cameron comments that "the last [New Labour] government made something of a Faustian pact with the City... It seemed frightened of challenging vested interests, believing... that the interests of big business were always one and the same as those with the economy as a whole." As if he's doing anything different. [...]

Capitalism has become more and more dominated by parasitic finance capital. For instance, in the 1880s, total British bank assets were equal to 5% of GDP. By the time of the great crash in 2008 they had risen to a staggering 500%.

In short, finance now plays a new role, not to develop the means of production, but as a cash cow for the domestic and global super-rich. It uses its political muscle and its direct control over much of government policy to suck the lifeblood out of the economy.

We know of the spiralling exploitation with young people now working for no wages, and the horror stories of people working for as little as £1 per hour; and the latest grotesque spectacle of workers dumped under a bridge in London to oversee the Jubilee.

One of the main aims of Cameron's cooperatives bill is to promote the development of small businesses. However, small and medium-sized businesses (SMEs), are being ruthlessly squeezed. Those that supply goods and services to bigger companies in the manufacturing sector are being hit by the stagnation of manufacturing. [...]

The reality of present-day capitalism, however, is that it is dominated by giant companies and big banks. It is an absurd fantasy to believe that just anyone can start a successful business and grow big.

But I'll tell you what is popular: When offered a menu of ideas associated with François Hollande as alternatives to austerity, the response is overwhelming. 95% supported a growth strategy to create jobs and reduce unemployment; 70% agreed with redistributing wealth from the richest; 74% supported the creation of a national investment bank to lend to businesses for growth; and 73% backed support for young people to go to college or university.

But what should Labour be demanding? Ed Miliband could demand a 50% levy on idle cash to support a massive job-creation programme with a massive clamp-down on tax avoidance.

In Greece, Spain and France movements against austerity are building up and developing as we speak.

In Britain there is an incredibly high level of monopoly in a whole range of industries. [...]

Despite the claim of the Thatcher government to be opening up the power companies to competition through privatisation, six big companies now control the retail electricity market: EDF Energy, Centrica, RWE npower, E.ON, Scottish Power, and Scottish and Southern Energy.

What these facts show is that capitalism is less and less competitive and less and less popular. And only a dyed in the wool member of the Adam Smith society would argue that private ownership of the banks and monopolies serves the public good. Big banks and corporations dictate to governments. But they are still not satisfied with the enormous wealth they have stacked up. [...]

Both Cameron and Ed Miliband claim they are seeking "a new model" of capitalism. But capitalism offers only a bleak future of economic stagnation and social crisis. What we need is a new model of society, a socialist reorganisation.

Improving human wealth and happiness depends on socialist planning which depends on taking over the giant banks and companies that dominate the economy. They need to be run democratically, on the basis of a plan, to meet the interests of the great majority of society, not the wealthy few who currently control them. Democratic workers' management and control would ensure that the economy was run efficiently.

Another issue the trade union movement needs to address is this: In the face of the crisis workers are entitled to expect our political leadership to offer a radical solution, to defend us. Yet Ed Miliband refused to support the great strikes and demos last year. He declares if he was elected tomorrow he would carry out the cuts, and is proud to retain the most draconian anti-trade union laws in the Western World.

This from a party funded by the hard-earned contributions from the trade union movement.

He comes to Liverpool and he gives fulsome praise to Joe Anderson for his responsible cuts policy then condemns the 47 [socialist councillors in Liverpool in the 1980s] who fought Thatcher and built the houses, created the jobs, opened nursery classes, gave jobs to apprentices.

Already candidates standing on the no-cuts platform of the Trade Unionist and Socialist Coalition are making their mark in elections. I came fifth out of 12 in the Liverpool mayoral campaign, attracting 5,000 votes.

Such a party could be dedicated to defending the gains established in the post war period, repealing trade union laws and fighting for the establishment of a just civilised socialist society where everyone could share in the fabulous wealth currently in the hands of the top 1%. 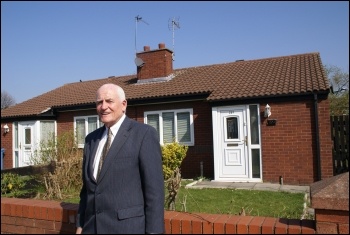 Tony Mulhearn in front of one of the house built by Liverpool City Council i the 1980s, photo by Harry Smith   (Click to enlarge)

Tony Mulhearn was a member of Liverpool city council from 1984 to 1987 and held the key role of President of the District Labour Party during this time. The council was led by the '47' socialist councillors.