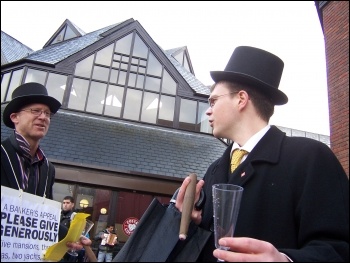 "Those with the broadest shoulders will bear the largest load... we're all in this together." These, David Cameron's famous words to his first Conservative Party conference as prime minister, asked ordinary people to close their eyes to reality.

Cameron asks us to join him on a journey to a make believe land where over-paid public sector workers with gold plated pensions, avaricious disabled people demanding welfare, and young people outrageously expecting a day's pay for a day's work, caused the economic crisis.

In his topsy-turvy world the greed of bankers, big business and the rich is a social good. Cameron 'rebrands' his friends with positive sounding labels in an attempt to conceal their parasitism. The rich are dubbed 'wealth and job creators'.

Richer by the minute

All of this, Cameron hopes, will help allay some of the anger felt by those who genuinely do create wealth (working class people) when they read this week's headlines. Because not only has the Sunday Times rich list revealed that those at the top are not suffering as a result of the cuts, we now find out that overall they are getting wealthier by the minute - all at our expense!

As public sector workers look forward to a lengthy pay freeze, paying more and getting less for their pensions or being forced to take up a place in the line at the job centre, the fat cats kick back and watch the money roll in.

The richest 1,000 people in Britain - around 0.00001% - have got 5% better off in the last year. Their individual fortunes added up make £414.26 billion. That's more than three times the government's own figures for the shortfall in 2010 - £137 billion. Even if these people were forced to pay just a 20% tax on their accumulated wealth (what most people pay on their very modest incomes) this revenue alone could almost fund the NHS each year!

Cameron's attempts to pull the wool over our eyes will not wash. The wealthy, who the Con-Dem government protect above all others, acquired their riches through cruel exploitation. It is working people who produce all the goods and provide society's services.

Those in the rich list's dizzy heights got there by creaming off a chunk of the wealth produced by workers and taking it for themselves. Now they ask for even more. As their crisis-ridden capitalist system fails we are asked to pay with our jobs and our services.

Working class people are not fooled by Cameron's trickery, searing anger is present on our streets. The fightback has begun. Mass strike action is planned for 10 May.

The 0.00001% should not sleep easy in their beds. The rest of us are demanding our fair share. The Socialist Party says let's take the wealth off the 1% and build a socialist society for the 99%.