French president Emmanuel Macron is doing his bit to assist budget cuts and economic belt-tightening... by buying a new set of plates for £44,000 according the Journal du Dimanche. The real price could be nearly ten times that according 'Le Canard enchaîné' who make it - over £438,000. The extravagant purchase of over 1,000 plates comes at the same time as huge austerity measures being implemented or planned by Macron and his government. And the news comes after a video emerged of Macron saying "crazy amounts of cash" were being spent on welfare benefits. He should eat his words - he has enough plates to do so. 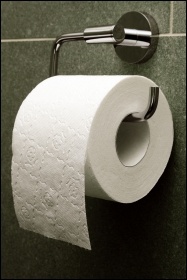 Broke schools are begging for lav paper, photo by Elya/CC   (Click to enlarge)

A primary school in Theresa May's own constituency is begging parents to buy toilet roll and other essentials because it is so strapped for cash.

The 420-pupil school in Maidenhead, Berkshire, sent a desperate email to parents with a link to an Amazon 'wish list' including pens, pencils - and most shamefully of all, toilet roll, as Tory cuts leave the school unable to afford the very basics.

One parent at the school said: "If the school is begging for toilet paper then it makes you wonder what's next?"

While the country's school bathrooms struggle to provide toilet paper, the bathrooms of the super-rich have been revealed to include golden taps.

One billionaire requested that Evian water flows out of the shower and bath as it's "better for the skin and hair", apparently. Mark Lawson, head of high value estates at the 'The Buying Solution', told the Telegraph he knows of one house with five pools - one indoor, one outdoor, and the rest on the terraces of three of the bedrooms.

And as for the golden taps, a pair of 24-carat gold and black hand-painted Murano glass taps come as standard in one Sloane Square apartment on sale for just £6.95 million.