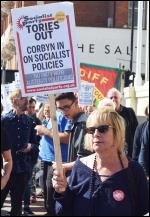 Parliament is packed with pro-capitalist politicians who neither reflect the balance of the views of the electorate on Brexit, nor the needs of the working class to overturn austerity.

The Conservatives, once among the most successful capitalist parties on the planet, are shattering into pieces before our eyes.
Their government is left suspended in mid-air unable to govern, with a general election as Johnson's only option.

Editorial of the Socialist: Boris Johnson's victory in the Tory leadership election will probably turn out to be the most predictable political event of 2019

Land privatisation, the largest neoliberal grab in Britain since Margaret Thatcher came to office in 1979, has scarcely been debated

Mass protests against the former dictator began in December 2018. He was removed by the Transitional Military Council to try to contain the developing revolutionary movement.

Around 50 people attended the recent Nottingham launch of 'This Is Not A Drill', the new handbook about challenging climate change by Extinction Rebellion (XR) which contains 'everything you need to know about' how 'to be radical', 'rise up' and 'rebel', writes Clare Wilkins, Nottingham Socialist Party.