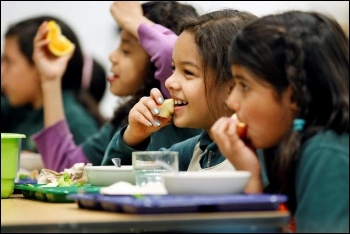 Against the backdrop of mass anti-racist protests and growing anger against inequality, the Tories have made another u-turn. This time over taking free school meal vouchers away from poor children during the summer holidays.

One minute the Tories were proclaiming concern for vulnerable children being stuck at home and not at school, then they were proposing to remove the free school meals safety net from at-risk and vulnerable families! It was part of their usual penny pinching from the working class while the rich keep their hands in their pockets.

The government retreat for this summer is welcome. But it is a result of pressure within the context of the mass protests rather than a sudden concern for children.

Some 1.3 million children are currently entitled to the vouchers for any family earning less than a measly £7,400 a year. In previous summers, parents on these tiny incomes were expected to foot the bill for children's lunches over the summer, leading to many parents starving to feed their children, reliance on food banks, and widespread holiday hunger.

Marcus Rashford, Manchester United and England footballer, has spoken passionately about the need for free school meals vouchers to continue during the holidays. Highlighting his own experiences in a single-parent family of five children he said: "The system is not built for families like mine to succeed, regardless of how hard my mum worked".

A survey carried out by the National Education Union in 2018 asked teachers about holiday hunger. They said that holiday hunger was affecting children more in that year than three years previously, that food banks were struggling to meet demand, and that children were returning to school after the holidays malnourished.

The threatened removal of vouchers, during a pandemic killing working-class people, was nothing less than a disgrace, particularly for those low-paid workers having to go without nutrition so that their children don't go without. The government should continue to provide free school meals in holiday time after the pandemic too.

The free school meal provision should be extended to include households in need with incomes above the £7,400 threshold. There also needs to be an immediate increase in the minimum wage, to at least £12 an hour, and benefit increases linked to the minimum wage, to enable parents to provide for their children more easily.

The education unions could play a key role in pressuring the government to extend provision. We have secured a victory. Now we must continue to ramp up the pressure and fight for a more equal society where none go without.