On 27 October, a hunger strike began of the mothers of political prisoners who were imprisoned as a result of the popular revolt which began on 18 October 2019.

Mass social protests against inequality, injustice and state repression, continue to erupt in Chile weeks after an uprising was sparked by a hike in Metro fares in Santiago

The following statement was issued on 4 November by members of Socialismo Revolucionario, CWI in Chile, and the Committee against repression in Chile

A human sea of Chilean workers, youth, students and others flooded onto the streets of central Santiago on 25 October. It was the largest demonstration in Chilean history. 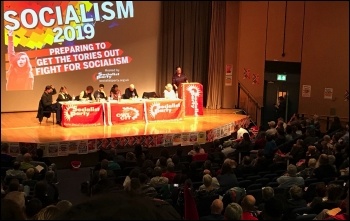 Ian Pattison reviews Portillo on Picasso, an episode from the ITV series Perspectives.

The revolt of students and young people demanding free education in Chile is continuing, with an estimated 200,000 marching on the latest demonstration in Santiago