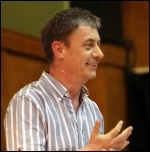 An interview with Socialist Party member Chris Baugh - three times elected PCS assistant general secretary - who will again be seeking the support of Left Unity to be its candidate in next year's election.

The PCS civil service union pay claim for a fully funded pay increase of 5% or £1,200 minimum and a commitment to centralised bargaining has been rejected by the Tory government.

On 31 January PCS members from across the UK civil service will participate in pay day protests over public sector pay restraint which has seen a 20% cut in wages since 2010. These protests come on the back of our fantastic consultative ballot result.

Other public sector unions are considering their position, with a number proposing to hold similar consultative ballots. This is to be welcomed - and they need to get on with it

The civil servants' union PCS is stepping up its pay campaign by holding a consultative ballot, timed to coincide with the autumn budget

Balloting members on the pay cap

PCS executive committee elections: It is vital that local reps act quickly to persuade members to vote for the Democracy Alliance slate

If the pay cap continues to the end of the decade, average civil service pay will fall in value by more than 20%

Equality and Human Rights Commission (EHRC) workers took another day of strike action on 1 March after the disgraceful sacking of ten of their colleagues by email last month. The PCS and Unite unions are now demanding the reinstatement of these workers.

John McInally looks at how the TUC reacted to the trade union laws and what comes next.