Despite nearly 47,000 signatures on a petition and at least three protests of well over 100 staff and students, the Sheffield University Council voted on 12 July to go ahead with their Executive Board's proposal to effectively close the Archaeology Department

Around 1,300 staff at the University of Liverpool began three weeks of strike action on 24 May, in a fight over cuts to jobs in the faculty of health and life sciences, said the University and College Union

As we go to press, a crucial meeting of the University and College Union (UCU) higher education committee is set to take place to decide the future strategy in the ongoing disputes over pensions, pay and conditions. 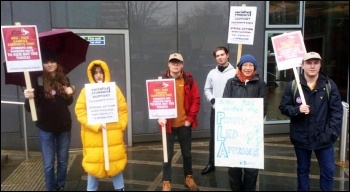 University and College Union (UCU) members at Nottingham College are to begin 15 days of strike action.