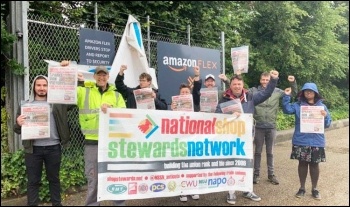 Sombre poem on human connection and solidarity: After the Great Recession of 2008 hit, the factory at the heart of Empire was shut down. Fern, a widow in her sixties, is suddenly compelled to leave the town she built her life around, taking off in her

Solidarity with Amazon workers!: Deep in the heart of the American South, through the mire of anti-union repression, nearly 6,000 Amazon workers in Bessemer, Alabama, are making a historic push to successfully organise the first Amazon warehouse in the United States

The Times and the Mail report the prime minister is "subdued" and "moody," due to struggling for money

I checked my emails late on 27 May and was surprised to see one from the NHS. The new test and trace system was going 'live' - not 1 June as expected, but 8am the next day!

"And to Mr Bezos my message is simple. I don't give a damn about your power. You think you're powerful? We're the ones that have the power."

Hundreds of injuries have taken place at Amazon warehouses in Britain in the past three years. The GMB union says that one worker at a London site was left unconscious after a head injury and stopped breathing

Amazon reports it is trying to remove listings for face masks and hand sanitiser marked up by up to 2,000%