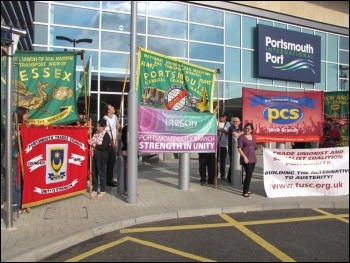 'Pay up Condor, Condor pay up!' It was to the sounds of the Pompey chimes that over 40 trade unionists and socialists gathered at Portsmouth ferry port on Saturday morning to protest against the exploitation of seafarers by Condor Ferries.

The protest was the launch of a campaign against Condor's practise of paying Ukrainian workers as little as £2.35 an hour for twice the hours of the average British worker.

The protest coincided with a ballot result by Unite workers at the same ferry port who have voted unanimously for strike action to defend their contracts from the city council's cuts.

In a statement, Ken Soar, group director of Condor, admitted that crew members are paid as little as £2.35 an hour. "Our crews are working on international freight vessels and their pay is very attractive to people living in the Ukraine.

"Their pay equates to approximately four times more than the average Ukrainian salary", Soar argued with no shortage of audacity.

After using European Union directive 'Mode 4' to recruit 90% of their crews from Eastern Europe, Condor exploits a loophole in UK legislation to avoid paying the legal minimum wage.

Condor claims that sailing to the Channel Islands is an 'international voyage', even though it is in UK territorial waters and the islands are a crown dependent. 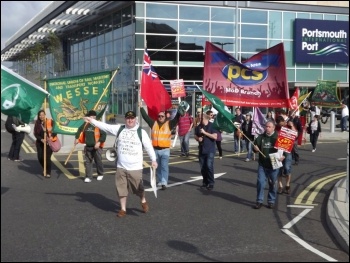 Condor is owned by the Macquarie group, an investment bank which also owns Wight Link ferries in Portsmouth.

Macquarie, who have assets of $154 billion (Aus), is notoriously anti-union. Last year the RMT and its supporters, including the National Shop Stewards Network, campaigned to defend engineer Paul Kelly, who was victimised and fired by the firm for his trade union activity.

At the meeting following the demonstration RMT members and supporters discussed the need to build the campaign.

Researcher Linda Kaucher spoke of the realties of 'social dumping' by companies who exploit EU laws.

"The shipping industry needs to be taken under public ownership so private firms are unable to exploit and divide workers." 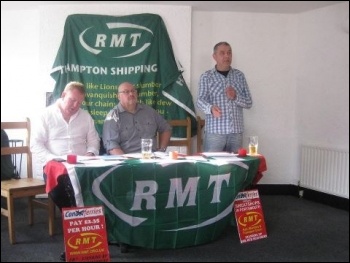 Further demonstrations in both Southampton and Portsmouth are planned to build the campaign. It is also a priority to learn from industrial disputes such as that at the Lindsey Oil Refinery in 2010, in order to build links with exploited European workers and cut across national divisions with demands for union rates of pay for all.

"Condor ferries are operating two 'sweatships' out of a newly built terminal which is funded by the people of Portsmouth", said RMT Southampton Shipping Branch secretary Darren Procter. "This campaign isn't about nationality; it's about fighting for fair wages for all."

Please send messages of support to Darren at:

This version of this article was first posted on the Socialist Party website on 23 July 2012 and may vary slightly from the version subsequently printed in The Socialist.