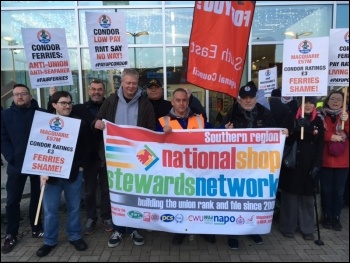 The scandal of low pay by profiteering shipping lines is being fought by a sustained campaign of the RMT transport union.

A recent protest took place in Portsmouth, where Darren Procter, RMT national secretary, outlined the problems that seafarers face: "Our campaign was launched in 2012 to expose the practice by Condor ferries of paying £2.45 an hour for 12-hour shifts, seven days a week on two month rosters.

"This is compared to an equivalent merchant seaman grade earning £27,000 a year, working 'week on, week off'."

This is despite the fact that Condor ferries run to the Channel Islands from Portsmouth, a council-owned port in UK waters, but avoid minimum wage legislation through the EU posted workers directive, where workers can be paid under the terms of their country of origin.

Darren explained: "The RMT is fighting to ensure all workers on Condor ferries are paid according to proper industry standards with 'week on, week off' contracts, to create jobs and ensure safer passage." As well as fighting for better pay, conditions and union recognition, the RMT are demanding the company agree binding targets for seafarer apprentices over the lifetime of the next contract.

"Condor have a monopoly on the service to the Channel Islands under a tender that ends in 2019. In a survey, 81% of islanders said the service was 'unsatisfactory' as a result of rising fares, safety issues and cancellations."

Under private ownership by Australian Macquarie bank, Condor ferries are run for profit not people.

If these services cannot be run with safe, well-paid crews, providing an affordable and reliable service while in private hands, then an incoming Corbyn-led Labour government should nationalise these and other ferry services.