Bailiffs collected council tax debts from 19,212 London homes in 2015-16. This is 51% up on the year before, according to the Child Poverty Action Group and Z2K charities.

Tower Hamlets to take anti-cuts fight into the council chamber

It's one world for the super-rich, and another one for the rest of us. Housing crisis versus landlords' profits, extortionate cost of football.

In the past year, councils in England and Wales have sent bailiffs in to collect debts over two million times.

On 13 July around 30 activists from the Unite trade union and local residents in Bromley, south London, stopped bailiffs evicting Paul Rooney and his 14 year-old daughter Roisin.

Fat cat City bankers were paid an average of £1.3 million last year, making their pay packages worth almost 50 times the average annual wage in the UK

An array of flashpoints

40. Even while the blockage at the top seems immovable, the working class can find ways round it. Explosions can take place on all kinds of issues, sometimes of a seemingly secondary character, as workers

Ross Longhurst of Nottingham, aged 72 and a longstanding campaigner, has been jailed for 28 days for not paying his council tax 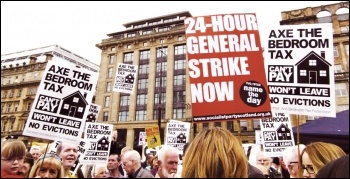 ...now lets end all council cuts: The bedroom tax has been effectively defeated in Scotland. The announcement that the Scottish government intends to end the crushing burden of the hated and reviled bedroom tax is a huge victory

Poor get poorer: We're still paying for the bankers' and capitalist crisis 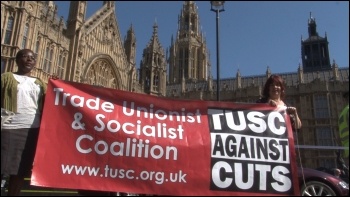 Swansea councillors: which side are you on?

Which side are you on? That question should be asked of every Labour councillor in Swansea as they prepare to vote on butchering £45 million of jobs and services, writes Ronnie Job, Swansea Socialist Party.

A report by Labour says that 112 councils in England who responded to a freedom of information request have issued more than 156,000 court summonses to people in council tax arrears since April