In Newcastle train guards on Northern Rail took their 17th day of strike action on 29 March.

The strike is in opposition to plans to axe guards in favour of driver-only operation, which would threaten passenger safety in order to maximise profits.

One of the strikers underlined how they were, "absolutely going to keep up the pressure." He went on to explain that the guards haven't taken strike action lightly, "but the withdrawal of labour is the only tool at our disposal."

All of the strikers felt the mood of the strike was swinging in their favour. One highlighted how their public support was impacting local MPs who were clearly listening to passengers who want guards on the trains.

Social media has also played an important role in the support they are gaining: "On Twitter and Facebook people are backing us - we can't be silenced." 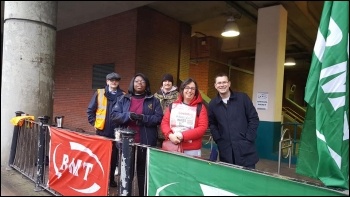 RMT members working on the Docklands Light Railway (DLR) in east London took strike action for two days on 28-29 March in defence of their terms and conditions.

There was a strong picket at Poplar DLR station where Brian, one of the strikers said: "We are not on strike to gain anything but to defend what we already have.

"For example they have introduced a roster programme which has increased our hours by over five a year without any respective pay rise.

"And at the same time they are trying to run down departments to bring in contractors through the back door".

More strike action is expected to coincide with the London marathon on 22 April.