Interviews with director of 'No fire zone' and David Cameron

The Con-Dem government has suffered a huge defeat over Syria and its plan for UK involvement in a US-led attack.
After being humiliated in the House of Commons vote, Cameron has conceded that there will be no British military participation in Syria.
This debacle has consequences way beyond Britain's imperialist military adventures

The following letter has been printed in the Guardian. It responds to an article about prime minister David Cameron's trade deals with the repressive regime in Kazakhstan

Leveson inquiry - The 1%: "definitely in this together"

Leveson: contradictions and a crisis of credibility

Since the Leveson inquiry began in November politicians have taken turns to take the stand, profess a desire to defend press freedom and lament the power of the media tycoons they once courted, before being given the opportunity to re-write history, writes Ben Norman. 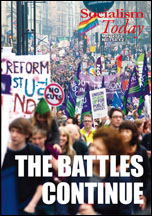 The need for concerted strike action against Con-Dem cuts in the public sector is more urgent than ever. Central to that struggle is the ongoing battle to stop the government forcing workers to work longer, pay more and get less. Peter Taaffe reports.

Only one week after the government's budget of new, swingeing cuts in jobs and services, accompanied by huge tax breaks for the rich and big business, it's been revealed that super-rich Tory party donors had earlier wined and dined with the prime minister, David Cameron... 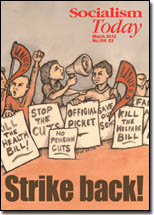 Striking back in austerity Britain

Jarrow demonstration: we are the 99% Take the wealth off the 1%, photo Paul Mattsson

In response to the growing opposition to this profit-hungry capitalist system, many of its proponents have argued that not all capitalism is bad. Lynn Walsh exposes the myths proposed by prime minister Cameron as he tries to sell us the idea of 'popular' capitalism.

Prime minister David Cameron now tells us that he is determined to announce action in this spring's Queen's speech on the phenomenally high pay of 'fat cat' company executives, writes Roger Shrives.

David Cameron was stoutly defending the 'nation'. This is what he claimed after he was humiliatingly defeated by 26 votes to one at the 9 December EU summit and withdrew from participating in discussions over a new EU treaty. But which nation, asks Peter Taaffe, Socialist Party general secretary. 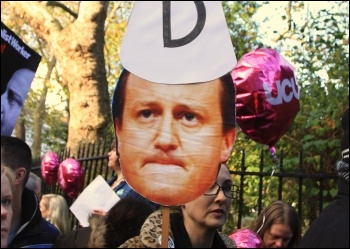 The squeamish should look away now. With 'Murdochgate' ongoing, the Bureau of Investigative Journalism has exposed further rotten sleaze at the top of government with claims from Bell Pottinger, a 'lobbying'...

Fox by name, fox by nature it seems. For despite the mounting and overwhelming evidence of cronyism against Tory MP Liam Fox, the defence minister remains in his post 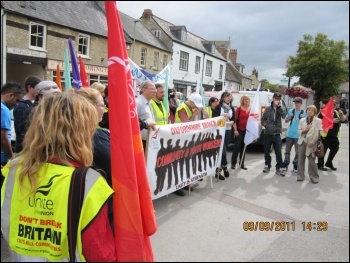 Even in the heart of his supposedly leafy constituency, "Disco Dave" is unable to escape the outcry caused by his government's policies

Con-Dem prime minister David Cameron was already up to his eyes in 'Murdochgate' before the latest tranche of revelations, writes Sean Figg.

Welcome to David Cameron's latest wheeze to save 'broken Britain' - the Social Impact Bond. It's got a lot in common with all Desperate Dave's other failed remedies...