No unity with Tories (6)

Striking back against EU law (3)

It is now over six months since the World Health Organisation declared the Covid-19 outbreak to be a global pandemic, and two weeks later, that Britain went into lockdown.

After the pandemic crisis, things will never be the same again. This will be similar to the situation after the two world wars of the 20th century.

Those who wanted Johnson to end the chaos and uncertainty will be disappointed. 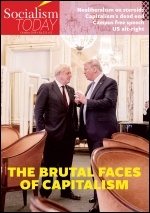 Stand firm against the pro-capitalist politicians

Neither a reversal of the 2016 EU referendum result nor a capitalist Brexit - 'soft' or 'no-deal' - can meet the interests of the working classes of Britain and Europe, or resolve the political crisis for capitalism that Brexit represents.