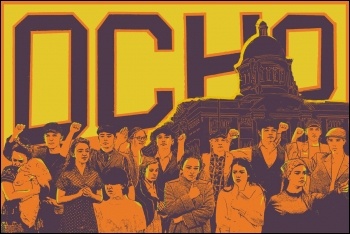 'Ocho' premiered on 27 June at Archbishop Sentamu Academy in Hull. It was specially commissioned to be performed by young students from the school's drama department.

The play draws heavily on real-life stories. It focuses on two of the men who were killed in action - and the way this loss was felt by the community and their families.

It deals superbly with the pathos and politics of the events. But it is the remarkable young cast that ensures this evening will stay in my memory for a very long time.

The focus and precision in performance from every single member was remarkable. It was the emotional truth underpinning every performance that moved me so much.

This is a story of the bravery of working class men and women, performed by a talented group of young people from east Hull who could clearly connect with the subject matter.

There were shades of Brecht and Lorca in the realisation of the piece. Elle Ideson and Jade Farnill, playing the two central women, carried an emotional integrity that brought to mind 'Mother Courage' or 'Yerma'.

The story told of bravery and the cast itself showed a brave approach to the work. There was no holding back at any stage. The ensemble work was performed with passion and precision.

It is a tribute to all who gave their time and skill that Hull can boast such a remarkable piece. But it is an indictment of the 'City of Culture' project that no funding was available for this amazing artwork.

Nevertheless, the team responsible has managed to raise the cash to tour the show across the region - and also to travel to Barcelona to perform at the English-language 'Institute of the Arts'.

The audience in Spain is in for a treat. This is a production of which all involved can be truly proud.