"Why would we want more privatisation?!" This is how the National Education Union (NEU) rep at Cumberland school in Newham, East London, closed the picket line meeting to stop the school becoming an academy. An enormous number of striking teachers and teaching assistants greeted pupils. A group of students shouted "good luck, good luck" and "fight the good fight".

Speakers were crowding to say a few words. One of them gave full support for the strike from the NEU national executive. Martin Powell-Davies, NEU London regional secretary, reported from unhelpful talks between management and the trade unions and quashed myths that academies improve education. One striking teacher said that if they don't have breakfast before they start work, they can come out at the end of the day realising they haven't had anything to drink or eat at all, because the workload is so heavy. 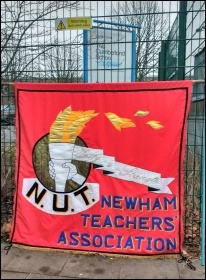 But Cumberland staff should be very confident they can win. A spate of Newham schools took strike action late last year. There's a growing mood in the borough that education must not be siphoned out of local control. A protest outside the next full council meeting was discussed. Its been reported that Labour councillors have voted in support of academies at local CLP meetings.

Newham is in the middle of the selecting councillors for the May 3rd council elections. If a new round of pro-academy Blairite councillors are selected, then campaigners may feel there is no choice but to stand against them in May to stop the tide of academies and austerity in Newham.