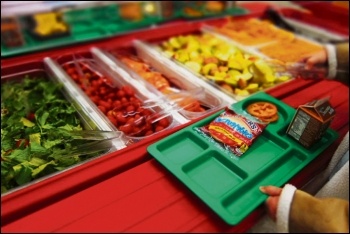 Dinner ladies in Grimethorpe are on indefinite strike to save their jobs, photo by US Dept of Agriculture/CC   (Click to enlarge)

Teaching assistants are working to rule, and will join the strike organised by public service union Unison on 22 October. The school has proposed that teaching assistants take over supervising meals to save cash.

Initially the women took six days of strike action, but the school would not back down. And Barnsley Council has not helped to resolve the dispute, saying the school is 'well managed'!

School management claims it faces a significant shortfall in the budget for 2019-20. However, teachers and school staff who support the dinner ladies say this does not make sense.

The mood is very strong and the women are standing firm, along with the solidarity from their colleagues and the parents at the school. Parents are joining the dinner ladies on the picket line every day.

It's the parents who have put a petition up to say they have no confidence in the school head, as she has failed to resolve concerns about teaching. Now 900 people in the community have signed the petition.

Unison has highlighted a number of areas where the school could make savings without any redundancies, and had offered to suspend industrial action for a review of the staffing structure. But school management refused.

The spirit on the picket line remains strong and solid, and the singing continues!