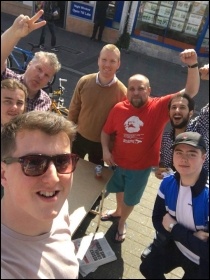 We've been accused of splitting the 'left-wing' vote; of sexism - some of the Labour cutters we're standing against are women; of bullying - we sent a polite letter asking for a discussion about fighting cuts; and all sorts of other ridiculous charges.

Don't blame TUSC for Labour's likely losses in May - or Corbyn either, as First Minister Carwyn Jones has tried to do. The fault belongs to Labour councillors who have backed Tory cuts.

Far from aiding the establishment parties, it will be TUSC that will be exposing their record.

The Liberals and Plaid Cymru - who ran Cardiff together only five years ago - slashed 1,000 jobs, closed care homes and schools, privatised home care for the elderly, and carried out many other brutal acts of vandalism to our public services.

But Labour won't be pointing that out, because they've backed their own cuts and privatisation programme. Cutting 1,600 jobs and £120 million of funding, and selling off leisure to notorious exploiters Greenwich Leisure Limited. So it will also be left to TUSC to fight to prevent Ukip from diverting the anger at austerity in a racist direction.

TUSC has been careful not to stand against councillors who backed Corbyn against the right-wing coup.

But despite standing down in six wards in Cardiff, we're launching the biggest socialist challenge in a generation - only the four main Welsh parties are standing more candidates. A third of Cardiff's population will get a chance to vote TUSC.

The reason we're standing is best summed up by a Labour councillor who asked us to stand down. He said: "We can protest, we can march, we can wave banners and flags, but if we are not a shield to the vulnerable and the dispossessed then we are not socialists."

Exactly. Protesting against the cuts isn't enough: we need socialist representatives who will stop making them.