Boris Johnson says austerity is over. So as councils prepare to set budgets next month, everyone - Johnson, the Labour leadership candidates, trade union leaders, councillors of every shade will be asked, "what are you going to do to stop council cuts?"

Blairite councillors are doing everything they can to prevent councils standing up to the Tories and defending their communities like Tony Mulhearn and the 'Liverpool 47' councillors did from 1983 to 1987.

Edmonton Constituency has become the second Enfield Labour Party to pass a resolution opposing all cuts, calling for 'no-cuts' budgets using reserves and for launching a mass campaign. 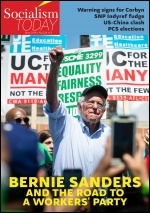