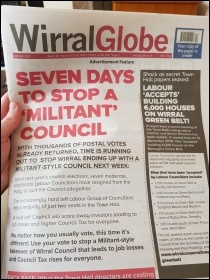 The anti-Militant wraparound on the Wirral Globe   (Click to enlarge)

"Don't let them do to Wirral what Derek Hatton and Militant did to Liverpool last time" was the warning of the Wirral Conservative Group's outrageous and desperate front page advertising wrap, printed for the Wirral Globe on 20 March. On 24 April, they stepped it up further: "Seven days to stop a Militant council".

Perhaps they used the advertising space to cover up the shameful headline of the actual front page behind the advertisement. It read: "Sex work link to welfare reform? Wirral MP leads inquiry into fears Universal Credit is driving women into prostitution".

After all, we must ask ourselves why on earth the people of Wirral wouldn't want to repeat the legacy of the socialist-led Liverpool City Council of 1983-1987. This council, in which supporters of Militant, forerunner of the Socialist Party, played the lead role, took on Thatcher and fought to implement pro-working-class policies.

These included: much needed council houses and flats - 5,000 built; rents frozen for five years; nurseries and leisure facilities opened; £10 million invested into schools; and 10,000 people a year employed on the council's Capital Programme.

Sadly, this is a far cry from the role being played by Labour councillors today, and that means the prospect of 'another Liverpool' in the Wirral is not what Labour is offering, despite what the Tory ads claim.

In fact, in contrast to the heroic role played by the 'Liverpool 47' councillors who stood up to Thatcher, Labour councils across Britain are currently dutifully implementing Tory austerity.

Research published by the British Medical Journal shows over 120,000 people have died unnecessarily as a result of Tory cuts to health and social care.

Between 1979 and 1983 the Tories had slashed £120 million from Liverpool City Council's budget. In addition to that, the outgoing local Tory-Liberal administration had left unallocated cuts of £10 million and was making 2,000 redundancies.

Contrary to the trite assertion put forward by Tories and Blairites that Militant and the Liverpool Council were unpopular, nothing could be further from the truth. The council had mass support and was never defeated in an election.

The anti-cuts Liverpool 47's leadership of the council attracted higher votes than in any election since World War Two.

On three occasions 30,000 council workers took strike action to defend the policies of the council. And the council couldn't have achieved what it did without mass support from the labour movement and wider working-class communities.

A combination of Labour leader Neil Kinnock and unelected judges undemocratically removed socialist councillors from office. Instead of passing on further Tory cuts to the people of Liverpool, the 47 councillors (of which a minority were Militant supporters) adopted the slogan "better to break the law than to break the poor".

It shows what councils can and should do to take on Tory austerity now. It is disgraceful that Blairite-led Labour councils and councillors today prefer to spend more time attacking Corbyn and the legacy of this struggle than they do fighting Tory austerity!

Council workers continued to support the councillors after they were removed from office and subjected to huge fines. One of the 47 councillors, Tony Mulhearn, was shown solidarity by council bin workers who volunteered to help him pay his fines by having an attachment in earnings on their own pay packets.

Solidarity of this kind is never extended to a person who is part of something genuinely unpopular with the workers!

The misleading and threadbare Kinnock-narrative about 'taxis delivering redundancy notices to council workers' is a tall tale rehashed by both capitalist media pundits and Blairites.

A recent Guardian article repeated the infamous part of the speech that Kinnock gave at the 1985 Labour party conference, where he "condemned the 'grotesque chaos of a Labour council hiring taxis to scuttle round the city handing out redundancy notices to its own workers.'"

The redundancy notices were actually issued as a stalling tactic to buy time so as to put pressure on the Labour leadership to support the council's no-cuts budget strategy. But as Tony Mulhearn and Peter Taaffe recount in their book Liverpool - The City That Dared To Fight: "While the Liverpool councillors were in power, from 1983-1987, no one was made redundant.

"Unfortunately, the same could not be said of Neil Kinnock in the autumn of 1987, when he pushed for 40 real redundancies among staff at the Labour Party's Walworth headquarters."

But this attack, like the recent one from the Guardian, is about slinging mud at the role Militant played in Liverpool council, which has been recognised by the working class in Merseyside and internationally.

It should therefore come as no surprise that Corbyn is also the subject of similar smears and witch-hunts. This is why, calling on the active support of Labour's members, trade unionists and socialists, Corbyn needs to act decisively to ditch the Blairites.

This could allow the working class to reclaim the Labour Party as a political organisation of its own.

This is why mandatory reselection of Labour MPs and the replacement of pro-cuts councillors with anti-austerity candidates - basic democratic accountability - are important. Labour members should be allowed to deselect MPs if they act like Tories and cause harm to the most vulnerable in our communities.

The idea of protecting the most vulnerable in society is something to be praised!