USA: After the polarised elections - what way forward for the working class? 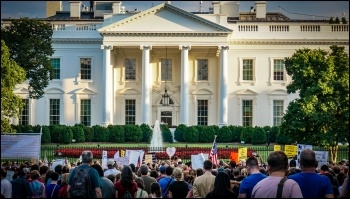 In the US, and around the world, millions greeted Trump's defeat in the US elections. His probable removal from office, notwithstanding his legal claims, will be widely welcomed.

Clearly, there will be changes within the US and international repercussions - although many of the US foreign policy changes will be in trying to act more closely with traditional US allies than in fundamental policy shifts, for example in dealing with the Chinese regime.

While Trump's defeat was welcomed, the limits of Biden's victory were clear. Despite his huge vote there was no 'blue wave'. And it was not just Biden's but also Trump's vote that soared in the polarised election. The Republicans can, depending on January's special election in Georgia, hold the Senate and, in this election, made gains in the House of Representatives.

As the Independent Socialist Group in the US, co-thinkers of the Socialist Party, explained: "Biden mostly ran against Trump rather than for meaningful policies". A result was that in some areas there was less motivation to vote.

The New York Times reported that in key cities in 'swing states' like Detroit, Milwaukee and Philadelphia, the "dynamic" was that "Mr Biden won an overwhelming share of the city but did not improve much over Mrs Clinton [who contested the 2016 election]. And in wards of the city with majority black populations, fewer voters cast their votes for him than they did for her... Mr Biden also appeared to do worse against Mr Trump in city wards with a large number of Latino voters."

Of course, the results were another demonstration of the undemocratic character of the US political system, beginning with the fact that in some states there are deliberate obstacles to even being allowed to cast a vote.

Biden's vote was mainly an anti-Trump one. Earlier this year, before Obama and others acted to save his nomination campaign, Biden was trailing in the primaries. He was rightly seen as a typical representative of pro-big business Democrats and a long-term 'Washington insider'. Indeed, in June 2019, Biden said at a New York fundraiser that he would not "demonise" the rich and promised that "no one's standard of living will change, nothing would fundamentally change".

At this gathering, Biden went on to talk about his ability to work with segregationists like former Senators Eastland and Talmadge, showing that he could "bring people together"!

Nevertheless, hopes have been raised by Biden's victory, but even bigger hopes were raised by Obama's 2008 victory when he succeeded George W Bush. However, Obama was followed by Trump, and a question now is, who will follow Biden? The fact is a Biden presidency could lead to such renewed disappointment that a right-wing populist can build upon Trump's 70-million-plus voters and win the next election in 2024.

Probably, Trump doesn't expect to win the legal cases he has launched to challenge the election result. While his legal action is at least partially motivated by personal pride, there is a more important political aspect - namely, keeping his voting base together for a comeback in 2024, possibly by himself, or a member of his family, or another right populist when Biden disappoints.

There are reports that Trump is about to launch a 'leadership political action committee', a legal body that individuals can donate up to $5,000 a year to, as a vehicle for future campaigning.

Certainly, Trump has the potential to organise his own personal base. Last month, a poll showed that 58% of Republicans and Republican-leaning independents considered themselves supporters of Trump rather than the Republican Party.

Trump and Co's post-election populist rhetoric aims at keeping his base mobilised by saying that the election was by "big money, the elite, the tech companies... who think you are deplorable".

Of course, vote rigging has a long history in the US. For years, the Republicans have been striving to enforce voter 'suppression', ie preventing people voting. But the same applies to the Democrats. The 19th century Democratic political machine in New York gave birth to the phrase 'Tammany Hall' - a byword for corruption and rigging, while in the southern states the Democratic leaders enforced racist 'Jim Crow' laws (which enforced segregation).

And it's not just history. In 2016, the Democrats in New York City removed over 125,000 from the voting register so that they couldn't vote for Bernie Sanders in the Democratic primary, and this year, forced the Howie Hawkins/Angela Walker Green Party campaign off the ballot paper in some states.

The situation in the USA is complex, exhibiting progressive and reactionary features. Trump and Co campaigned against "socialism" both in reaction to the widespread interest in socialism among young people in the US and, simultaneously, to exploit the hostility to the Cuban and Venezuelan regimes among some Latinos.

This latter campaign helped Trump increase his vote by over one million in Florida and get over 51% of the vote there. But this was not a mass vote for reaction. Simultaneously, 60.8% of people in Florida voted for a state-wide increase in the minimum wage to $15 an hour.

Nationally, notwithstanding Trump and the Republicans hostile campaigning, a Fox News exit poll showed 72% of voters favour switching to a government-run healthcare plan, while 71% believed that the landmark Supreme Court 'Roe v Wade' ruling, which helped legalise abortion, should remain as it is.

This shows how, in reaction to the deep economic and social crisis affecting the US, there is a widespread idea that things can't go on in the same direction. Years of stagnating or falling living standards for workers and sections of the middle class have produced disenchantment and, among some, a search for change.

This has been reflected in the massive increase in interest in socialism, including the support that left-leaning Sanders got in his 2016 and 2020 presidential election nomination campaigns.

Fearing that disappointment with Biden will strengthen the search for an alternative, sections of the Democratic Party leadership almost immediately began attacking the 'left' for the party's poor election showing, a blatant attempt to shift blame and also a pre-emptive strike to secure their position.

As President, Biden will be put to the test and found wanting - increasingly he will try to use the threat of Trump as a scarecrow. On this basis, Biden and the Democratic leadership will try to strike 'across the aisles' deals with at least some Republicans.

If the Republicans retain control of the Senate, Biden and Co will say there is no alternative if they want to get anything done. Even before election day, Biden was hinting that he was open to appointing Republicans to his cabinet, something Obama did four times during his presidency.

This is not accidental. The Democrats are a capitalist party, like the Republicans. Biden himself represents the so-called 'Washington consensus', the set of capitalist, often neoliberal, policies that were enforced in many countries from the 1980s until the 2008-9 economic crisis.

Thomas Frank, a US commentator, wrote: "Biden personally played a leading role in many of the signature initiatives of the era: Nafta-style trade agreements, lucrative favours for banks, tough-on-crime measures, proposed cuts to social security...

"Bill Clinton's welfare reform initiative was in fact a capitulation to racist tropes and brought about an explosion in extreme poverty. The great prison crackdown of 1994 was another step in cementing the New Jim Crow. And the biggest shortcoming of Obama's Affordable Care Act - leaving people's health insurance tied to their employer - has become painfully obvious in this era of mass unemployment and mass infection...

"It is no coincidence that, as Democrats pursued their professional-class 'third way', Republicans became ever bolder in their preposterous claim to be a 'workers' party' representing the aspirations of ordinary people."

Experience shows that the 'lesser evil' argument (ie better Biden than Trump) is, at best, short-termist and, more importantly, obscures the question of starting the work now to win support for an independent, working-class based force that can defend living standards and pose the urgent necessity for a socialist alternative.

Even more than ever, there is the need for such a party that can pose an alternative, oppose all forms of oppression, and build a united struggle.

This is linked to the question of how to oppose and weaken the threat of right populism. Attempts need to be made to try to make inroads into those workers who voted for Trump, some of who had voted for Obama in 2008.

It means especially looking towards those who supported Trump because he appeared to be outside the ruling elite, without making any concessions to those racists who supported him.

In his nomination campaign, Sanders partially raised this, but then threw it away when he capitulated to the Democratic leadership in both 2016 and this year.

Sanders himself has a big responsibility for what has happened. It is now decades since he moved away from supporting the idea of forming a Labor party in the US. In doing so, he blocked opportunities to start to seriously build one.

Sanders has twice gathered mass support in the last five years, and yet at both times turned his supporters towards supporting the Democrats, a party which offers no alternative to capitalism.

A new force is above all necessary. Alongside clarity that the Democratic Party offers no way forward for working people or socialists, it needs to have a clear programme, with democratic and socialist demands.

Such a programme would be an alternative, not only to capitalism, but also to the individualist solutions proposed by both the supporters of 'identity politics' and the demagogy of the right-populists. Even Trump's vote is unstable; those who see that he is not an 'outsider' to capitalism could be won to socialist ideas.

The creation of such a movement is already being prepared in the experiences of the struggles and protests that have rocked the US recently. The Black Lives Matter protests, the recent wave of workers' strikes, the women's demonstrations, the different protests against Trump and his policies, and the increased election turnout, all show the potential.

New struggles will drive events. The challenge facing socialists is to build the forces that can help lay the basis for a movement that will transform society, both in the US and, given the US's international position, worldwide.