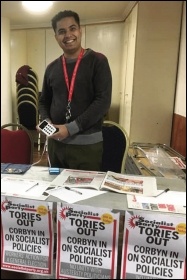 A packed public meeting on the turmoil in British politics and the Conservative Party was hosted by London Socialist Party on 12 September. 80 people attended.

Socialist Party deputy general secretary Hannah Sell addressed the turbulent time facing the capitalist class and its politicians as they navigate their way through the tricky task of delivering a Brexit resolution in the interests of big business. Hannah spoke on the role of the Socialist Party and trade unions against the latest Tory face in Downing Street, Boris Johnson.

The need to end austerity and argue for a pro-worker Brexit - through a Corbyn-led Labour government, standing on socialist policies - was put forward as the priority. 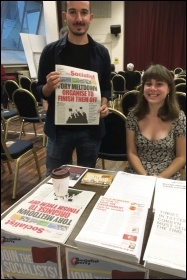 The key issues for the working class are widely ignored by establishment parties. The devastating impact of austerity - imposed by the Tory-Lib Dem coalition, then in recent years the Tories alone - must be at the forefront of campaigning.

The meeting then opened up to the floor, including updates on the party's work in London. A Socialist Party has member convinced general union Unite's London healthcare regional industrial sector committee to support a general election before any second referendum, and for Labour to fight that on socialist policies. 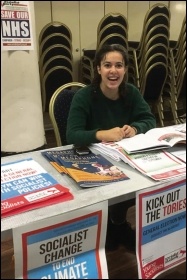 Finally, a fighting fund collection took place where £1,374 was donated by individuals and Socialist Party branches from across London.