Anxious to avoid a no-deal Brexit, and desperate to avoid the blame for causing one, both Boris Johnson and the institutions of the EU have stepped back from the brink.

Johnson has been forced to send off a request for an extension to Article 50. And his proposed withdrawal agreement has crossed lines he previously refused to cross. At the same time, the 27 countries of the EU amended the withdrawal agreement, despite months of claiming it was impossible to do so.

If the Tory toff Johnson, with a parliamentary majority of minus 43, can force concessions from the EU, imagine what a Corbyn-led government could achieve if it negotiated on an entirely different basis - demanding not a weakening of workers' rights but their strengthening; insisting on the abolition of laws that attempt to prohibit nationalisation and state aid, and undermine trade union and workers' rights!

It would then be possible to appeal for solidarity from workers across the EU. Millions of them, like the French transport workers striking against Macron's neo-liberal pension reform, are angry about the same issues as workers in Britain and would be inspired by such a call.

The concessions Johnson has won, of course, are not in favour of working-class people but of the Tory right's dream of an ultra-Thatcherite Britain with even fewer workers' rights than today.

Hence the removal from the legally-binding withdrawal agreement of the reference to a 'level playing field' on workers' rights and environmental standards. In order to satisfy the Tory hard right, the reference to being 'aligned' to the EU has also been removed and replaced with 'a future free trade agreement'.

Johnson's deal is not quite, therefore, May's deal in a blond wig, but many of its central tenets remain the same. The other substantial change, however, is on the question of Northern Ireland.

May's backstop has been replaced by a situation where Northern Ireland remains aligned to the EU from the end of the transition period for at least four years. This effectively puts a border in the Irish Sea, a situation which May had said no British prime minister could allow. 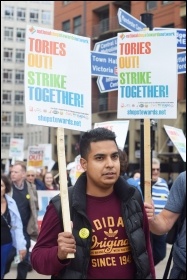 On a NSSN lobby of the TUC, photo Mary Finch   (Click to enlarge)

All of the supposed 'solutions' put forward by capitalist politicians to the question of Brexit and the Irish border would aggravate sectarian tensions - pointing to the inability of capitalism to solve the national question in Ireland.

Nonetheless, it is a sign of Johnson's extreme lightmindedness that he has done an abrupt u-turn on the issue, not knowing or caring about the potential for it to result in increased conflict in Northern Ireland.

The weaknesses of Johnson's deal make it unattractive to the pro-remain, pro-capitalist politicians. For the British capitalist class and their political representatives, however, there are no good options. They want to avoid a no-deal Brexit, and to remain as closely aligned to the EU as possible.

The EU granting an extension in itself, however, solves nothing. It just kicks the can a little way down the road.

The threat of a no-deal crash is only removed by agreeing a deal. It is possible, therefore, that despite the opposition of the DUP, a version of the current deal could scrape through.

Even if this were to happen, however, the situation would remain crisis-ridden for British capitalism. Negotiations on a future trading relationship would just be beginning, led by a minority government which is unable to govern. A general election would still be inherent in the situation.

The majority of the capitalist class are also desperate to avoid a Jeremy Corbyn-led government. They fear that such a government could be pushed from below to implement a socialist programme that threatened their rule. Therefore, pro-capitalist politicians from every party, including Labour, are working to try to avoid a general election and, in particular, a Corbyn victory.

Mistakenly, Corbyn and the Labour left have been sucked into parliamentary manoeuvres at the expense of a clear campaign for a general election. The workers' movement now needs to fight remorselessly for an immediate general election and for the election of a Corbyn-led government on a socialist programme.

Such a campaign could cut across division, by bringing common class interests to the fore. In doing so, it would also assist the workers' movement in Northern Ireland in its fight for workers' unity and against the sectarianism Johnson so lightly fuels.

It could also cut across division in Britain. While parliament was meeting on Saturday hundreds of thousands of protestors took to the streets to demand a new 'peoples' vote' on EU membership.

Many of the platform speakers - such as Jo Swinson who served in the vicious anti-working class ConDem government, and Tory grandee Michael Heseltine - are completely opposed to the interests of the working class. Many of the working and middle-class protestors, however, were motivated by anger at Boris Johnson and his ilk.

A mass workers' movement campaign for a real 'peoples' vote' - a general election - could win the support of many of those protestors.

Jeremy Corbyn and the Labour affiliated unions are pushing for a confirmatory referendum on a deal. However, in order to speak to the millions of workers who voted leave - creating unity and not division - it would have to be combined with a pledge to negotiate a Brexit deal in the interests of the working class, and to argue for such a deal in any referendum.

Far more important for creating a united movement to get the Tories out, however, would be fighting on a socialist programme that offered a real alternative to austerity: decent public services, mass council house building, free education, a living wage and more.