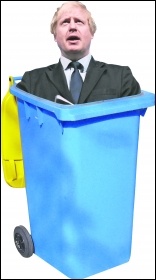 Johnson and his bosses' Brexit deal remain suspended in mid-air.

Unable to govern, Johnson's only way out has been a high-risk gamble on a general election, hoping against hope that it will win him a working majority.

The result of the election - planned for 12 December - is uncertain. Right now the polls show a lead for the Tories of around 10%. But that could melt away during the election campaign.

Johnson - like May and Cameron before him - heads a viciously anti-working class, pro-super-rich government. His bosses' Brexit deal is not designed to 'give back control' to working-class people, but to give even greater control to big business to super-exploit workers and sell off public services.

The Socialist Party has been campaigning for a general election because it gives an opportunity to throw this rotten government of the super-rich out of office. This has not been the approach of the majority of the Parliamentary Labour Party, however.

The pro-big business 'Tories in disguise' who make up the right wing of the Labour Party are openly campaigning against Corbyn winning a general election. Even figures on the left of Labour - like Shadow Chancellor John McDonnell - have prioritised campaigning for a second EU referendum before a general election.

At the same time, under pressure from the pro-capitalist majority of the Parliamentary Labour Party, Corbyn has focused on manoeuvres in Westminster rather than mobilising the working class to get the Tories out and to bring a socialist government to power. The result is that workers have heard no clear voice fighting for their interests in parliament.

The mistakes of the Labour left have made more difficult the terrain on which the pre-Christmas election will be fought. Nonetheless, if Corbyn comes out with a fighting, socialist manifesto he could transform the situation and win the general election.

The 2017 anti-austerity manifesto could be a starting point. But the 2019 manifesto should go further.

It should also include, as part of a socialist programme, reversing all cuts to council services, scrapping Universal Credit, and a pledge to nationalise under democratic working-class control, the banks and major companies, along with those which carry out closures and job cuts in the name of Brexit or otherwise.

The above is a slightly updated version of the front page of the Socialist, issue 1062, to take into account the vote in parliament for a general election on 12 December, which happened while the Socialist was being printed.

Click here for the editorial of issue 1062 (also written just before the vote for an election).