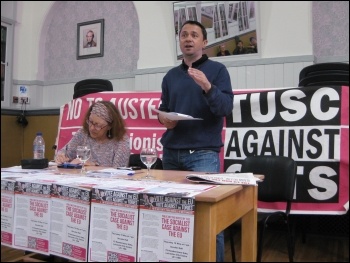 30 people packed the room at a Trade Unionist and Socialist Coalition (TUSC) meeting in Leicester on 19 May to hear Rob Williams, Socialist Party executive committee and chair of the National Shop Stewards Network. This was part of TUSC's 20 city tour to campaign against the bosses EU.

A number of people, some at their first meeting, asked questions to clarify our position. We were able to explain that we are for real internationalism. But that's why we need a socialist Europe, not the 'Employers' Union' that is the EU, with its austerity agenda.

Rob took up the arguments of some on the left who say 'we can't argue for a Leave strategy because it will result in the Tories being strengthened, particularly the right'. But if there is a defeat for Cameron, he could be ejected as prime minister. In fact, it is likely that with a split Tory government there could be a general election, and then a Jeremy Corbyn-led government. The Tories are at each other throats, and a Leave vote would be a major defeat for them.

The previous night Becci Heagney from the Socialist Party national committee spoke at a similar meeting in Derby and answered those trade union and Labour Party leaders who claim that the EU defends workers' rights:

"The most griping one for me is equal pay. Firstly, men and women still don't have equal pay. But secondly the Equal Pay Act was achieved by women workers taking strike action and fighting for it. I am sure many here have seen the film Made in Dagenham, it's not called Made in Brussels!

"Regardless of whether we are in the EU or out of it, working class people need to rely on their own strength to organise to defend our own rights and to fight for better jobs, wages and conditions."

Socialist case against the EU