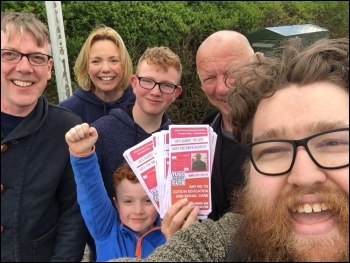 Swansea TUSC has seen an energetic start to our local election campaigning in the city this year with activists from the Socialist Party, RMT and residents from across the city coming out most evenings over the past few weeks to spread our anti-austerity message.

Well known socialists Alec Thraves and Collin John, candidates in Castle ward, have had a great reception on the doorsteps with our posters now up in several pubs. Claire Job, an NHS worker also standing in Castle ward, has spoken of the number of local residents who have told us about the effects of council cuts on the care and quality of life of some of the most vulnerable people in the city.

All of our Castle candidates along with Owen Herbert in Townhill and Mark Evans in Upper Loughor have been putting pressure on incumbents and candidates to act against the devastating cuts that have been stripping our city of jobs and services.

The Labour administration passed a three-year projection this February that laid out a massive £61 million cut over the next three years.

Despite the local media sitting firmly in the pocket of the Labour Party austerity makers, our message that there is an alternative to the current onslaught is starting to gain the ear of local communities and our material has been used to challenge pro-cuts councillors online.