In talks about pay with GMB and Unite union negotiators, EDF Energy bosses said the workers in the north east call centre were "paid too much for what they do." They offered a one-off, non-consolidated, taxable bonus of £450 for 2019.

EDF has said that profits are down in its nuclear sector and it cannot afford to pay more. This is far from the truth. EDF would rather pay shareholders' dividends than workers' wages.

Workers should reject the offer and demand a proper pay rise. We need to nationalise the utility companies under democratic workers' control so that workers get proper wages and customers get a fair deal.

Meanwhile, in north Birmingham, the council is threatening to close Walsall Road allotment, currently used by over 100 local gardeners, and considered one of the best sites in the country. It has been featured twice on BBC Gardeners' World.

Politics in Worcestershire is becoming confusing. Louise Griffiths was elected a Green councillor for Battenhall on Worcester City Council last year - but has defected to the Conservatives, complaining of antisemitism, and feeling "restricted by the set-up of the Green Party here in Worcester."

I think a bit more testing out of candidates' values and views might be in order to see how committed they are before they stand. 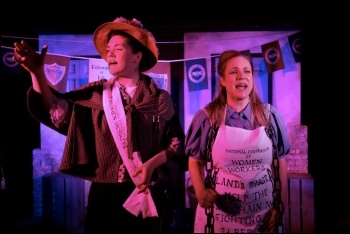 Four GMB union members from Beverley and their partners travelled across the Humber Bridge to the former ropery works in Barton-upon-Humber to watch a Townsend Theatre production of 'Rouse, Ye Women!'

The women working in these sweatshop conditions were dependent on the "fogger" - a middleman, subcontractor to the large manufacturers - who delivered iron rods and collected the finished chains.

It was the work of Mary Macarthur, the founder of the 100,000-strong National Federation of Women Workers, that inspired and gave confidence to these women to strike. Ten weeks in total - and £4,000 raised in strike fund, an enormous amount at the time.

Thanks to the strike and Macarthur, the Liberal government passed the 'Trade Boards Act' to set minimum rates in four low-paid trades, at two-and-a-half pence per hour. For most women, this was a rise of 100%.

If we fight, yes we can win. The verdict of Beverley GMB members: absolutely outstanding, thoroughly enjoyable performance - highly recommended.

I refused, and got searched - when they realised I was a 'threat to the public' as I had my work knife on my keys. I told them I work on a building site. They took it. That cost me 15 quid.

A report in the Guardian went on: "In recent years, millions of people have turned to the high-cost payday loans to help pay their rent or mortgage, deal with an unexpected emergency, or simply afford their weekly food shop."

These statistics cannot convey the sheer misery behind them - the human and social cost paid for in poor mental and physical health, homelessness, family and relationship breakdown and rising crime.

We socialists must, however, translate these stats into a programme for revolutionary socialist change - based on common, democratic public ownership of the means of life, including land, our essential public services, industries, and the finance and banking sector.