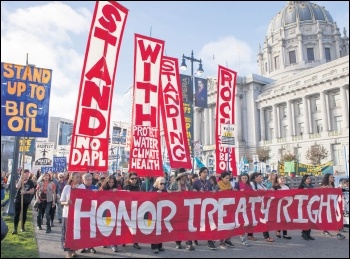 After months of struggle, US authorities have agreed to reroute the proposed Standing Rock oil pipeline, photo by Pax Ahimsa Gethen (Creative Commons)   (Click to enlarge)

US authorities (subject to possible appeal) have agreed to abandon the planned oil pipeline through Standing Rock, North Dakota, after a months-long standoff between protesters and armed police. This represents a significant victory over corporate interests in favour of the environment and native people's land rights. In this article, written before the decision, Tony Wilsdon of Socialist Alternative (US co-thinkers of the Socialist Party) explained the background issues and why protecting the environment is linked to the struggle for socialism.

Socialist Alternative has built solidarity meetings in a number of cities, raised money and sent representatives to Standing Rock.

This struggle highlights the need to escalate our fight against climate change and link it to a struggle against a system that not only destroys our environment, but also rests on the oppression of native people, people of colour, and the exploitation of workers.

Central to this struggle is the decision to route the 1,134-mile pipeline upstream of the Missouri River, the major water supply for the Standing Rock Sioux Tribe. With over 2,000 pipeline ruptures and spills in the last ten years, there is very real fear of major pollution.

The issue of preserving land and water is central to indigenous peoples, having been brutally driven off their original tribal lands by US authorities in the past.

Republicans are funded to the hilt by oil money. But so are the Democrats, and it was the Obama administration which oversaw the largest increase in oil extraction in a generation and whose state department pushed fracking globally.

"The statement, which condemned past violence and called on North Dakota authorities to drop all charges against protesters and journalists, was passed unanimously. But our demands and the voices of so many others in the US and internationally have gone unheeded."

Imagine how much more powerful our movements would be if we had more representatives like Kshama Sawant who unapologetically stood on the side of the 99% and used their positions to build and strengthen our movements.

Labour should also be spearheading this struggle. Some more progressive unions have taken clear positions against global climate change, having come out strongly in support of the struggle against the pipeline.

However, the main national labour federation, the AFL-CIO, is scandalously supporting the pipeline project. It is taking a narrow view of support for pipeline jobs over the broader issues of this struggle.

We need to link the legitimate concern of workers about the need for good jobs with urgent action on climate change.

We also need policies that address the power of the fossil fuel industry and the major banks that fund them. This would mean taking the energy sector out the hands of the ruling elite who control these resources and exploit them for profit.

They should be run under the democratic control and management of the 99%. This should be part of an emergency plan to tackle global warming, organise climate justice, and fight for a socialist society.