Workers at Heathrow Airport are to take strike action for four days in December against the bosses' "fire and rehire" plans, cutting pay in the process.

On 25 January, myself and 12 others were convicted of aggravated trespass and being in a restricted area of an airport without permission, writes The courts are making an example of climate protesters. 'Plane Stupid' activists face jail for demonstrating against third runway plans at London Heathrow airport last July. Melanie Strickland, one of the 'Heathrow 13', speaks in the Socialist..

Heathrow: Why Furious Workers Walked Out

BRITISH AIRWAYS (BA) staff at Heathrow airport walked out in a wildcat action on 18 July to prevent the company imposing an automated time management scheme (ATR)... 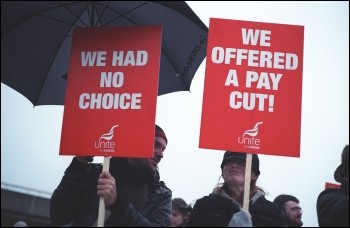 BA cabin crew strike: 'We shall not be moved'

AS THE second round of strikes by British Airways (BA) cabin crew comes to a conclusion no-one within a ten mile radius of Heathrow could possibly be unaware of what is happening, writes Neil Cafferky.

Opposing the expansion of Heathrow

The government's decision to give the go ahead for a third runway at Heathrow has dominated headlines in London, writes Neil Cafferky.


Over 3,000 people marched from Hatton Cross to Sipson to demonstrate their opposition to a third runway at Heathrow airport, writes Neil Cafferky.

Airports: Expanding profits at our expense

A WEEK of protests against the proposed third runway at Heathrow airport culminated on 19 August in a demonstration along the proposed site and a blockade of Heathrow operator BAA's headquarters.... By Neil Cafferky

A SENIOR shop steward at British Airways (BA) spoke to the socialist about the settlement reached with the company after the spontaneous strikes by check-in staff at Heathrow airport...