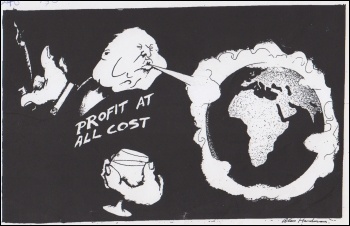 Profit at all cost, cartoon by Alan Hardman   (Click to enlarge)

A recent poll has shown 68% support - 80% among 18-44 year olds - for building wind farms across Britain. But, instead of investing in renewable energy and creating green jobs, the Con-Dems are cutting wind power subsidies and listening to the big six energy companies.

Britain has an energy crisis. Many power stations, both nuclear and fossil fuel, are coming to the end of their lives. The government claims it is attempting to reduce carbon emissions to deal with global warming, but admits 'the market' has failed to sufficiently invest in new power stations let alone in renewables.

Yet their 'solution' is to propose subsidies to the big energy companies that will favour nuclear power while not adequately speeding up the replacement of carbon producing fossil fuels with cleaner renewable technology like wind, wave and solar power.

These nuclear subsidies - illegal under European law - are hidden by the "contracts for difference" system proposed in the bill which guarantee prices to companies.

Nuclear fission is not a "clean alternative" to fossil fuels. The risks were highlighted by the Fukushima nuclear disaster in Japan last year.

The Max Planck Institute of Chemistry in Germany recently produced a report claiming that major nuclear accidents such as the core meltdowns in Chernobyl and Fukushima are likely to happen once every ten to 20 years, far more frequently than previous estimates. A single accident could affect millions of people.

Some argue 'but the Fukushima nuclear plant was badly situated in an earthquake zone, ours aren't'. But do we trust profit-driven energy companies? Were the same assurances of safety not made on behalf of Fukushima in the past?

In addition, there is the lack of a plan for the safe storage of nuclear waste over the hundreds of thousands of years that would be necessary. The financial cost is of course borne by the taxpayer, not by private companies. But we could also bear the cost in terms of safety!

Addressing climate change, safety, and the need for clean energy cannot be left to big business and 'the market'. The energy industry must be nationalised as part of a democratic socialist plan that can invest in and develop renewable energy.

A rapid shift to renewables is needed, alongside other measures such as development of public transport and the conservation of energy. Nuclear fission should not be part of that plan. Genuine international cooperation is necessary. But capitalism is incapable of dealing with these issues; this is why a socialist policy is so necessary!

Planning for the Planet

How Socialism Could Save the Environment