"My first reaction was the managers have lost the plot, or buried their heads in the sand"

Despite sub-zero temperatures from the "Beast from the East" on the first morning of the strike and intimidating tactics from the local management, FCC recycling workers are standing firm

Thirty Sheffield recycling workers at The Green Company continued their dispute for premium pay, welfare facilities and against bullying management with strike action on 25 and 26 October, and have given notice of an indefinite strike from Wednesday 29 November

The recycling workers in Sheffield who had already taken six days of strike action, upped the ante on their uncharitable 'charity' employers by staging an unofficial walk-out on Thursday 16th October, closing four of the five sites

Money for old rope! Trade unions suspect that the boss of the 'charity' company running Sheffield's recycling centres is taking excessive consultancy fees and expenses out of the accounts

Despite last minute attempts by Sova management to bully Sheffield's recycling workers into calling off their industrial action, the weekend's strike went ahead 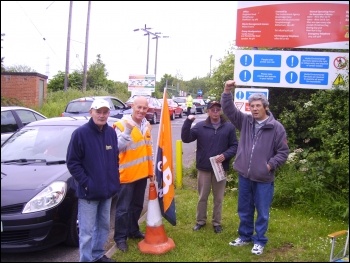 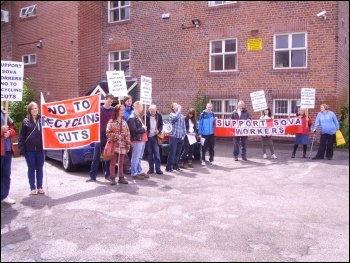 Sova recycling workers in Sheffield, members of the GMB, have won the reinstatement of six colleagues

We marched through the gates into the yard chanting "MHH-hear us say, Picket lines are here to stay!" MHH Contracting Ltd are a haulage company that have been hired by Veolia/Sova to break the Sova recycling workers' strike in Sheffield, writes Alistair Tice. 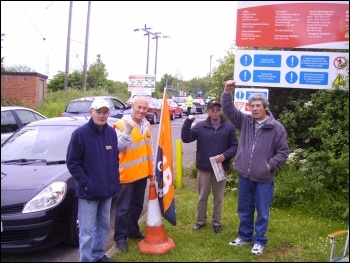 The Sova workers at the five Dump-It sites have now taken ten days of strike action, with another three days of strikes planned this week

Private waste management contractor Veolia have met with solid resistance in their attacks on workers' pay and conditions in Sheffield, writes Chaz Lockett.