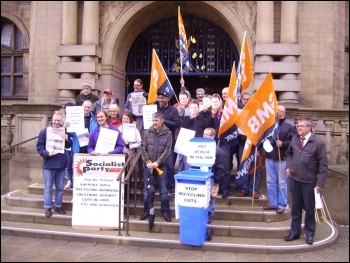 On Wednesday 13 June, around 50 striking recycling centre workers, representatives of the GMB union, and supporters, gathered on the steps of Sheffield town hall to demand that the council ends cuts and job losses at Dump-It sites in the city.

Each GMB member wore a mask of the face of Jack Scott, Labour council cabinet member for the environment - his behaviour in refusing to discuss or enter into negotiations with the GMB has earned him an especially hated place in the minds of most of the workers.

His presence on so many faces was made even more ironic by the fact that his chair in the council chamber was empty - he is currently away on holiday in Australia!

The Dump-It sites are operated under council contract by Veolia, who then subcontracts to Sova, a 'charity' for rehabilitating ex-offenders, but who are making a fat profit from operating the recycling sites, and who are using ex-offenders as scab labour.

Chants of 'Sova Sova Sova, Out Out Out!' rang around Barkers Pool in the centre of Sheffield.

Socialist Party members have visited picket lines every day in the dispute and have helped by raising more than £350 for the GMB's strike fund.

The trust and respect garnered by our solid support was reflected in the GMB asking Socialist Party member Alistair Tice to present 3,000 petition signatures to the council, whilst Socialist Party members were asked to ask questions from the public gallery on behalf of the striking workers.

Within the council chamber, Alistair spoke passionately, lambasting the job losses and reduction in hours for these workers on minimum wage and dwindling hours.

He pointed out that this service is self-funding, and indeed highly profitable for Veolia and Sova, and that it should be brought back in-house in order to benefit the people of Sheffield rather than the private operators.

He received a loud ovation from the public gallery, stuffed with strikers and their supporters.

Julie Dore, Labour leader of the council, replied to the petition saying that Labour could not help but make frontline cuts, faced with £170 million cuts passed down from the Con-Dem government.

This was met with furious yells from the gallery of "We're self-funding!" and "Veolia's making a profit here!".

The Socialist Party demands that Labour councils elected to oppose the Con-Dems do so effectively by opposing all cuts and fighting the government for more funding, as was so successfully done by the Liverpool council of 1983-7. Public questions from the gallery focused on the tendering of the contract - why was the GMB not involved in the selection of Veolia for the contract, and why did the murky history of past contractors not cause a change in attitude?

Unbelievably, the council leader claimed that she did not know that Veolia was creaming of £300,000 profit this year just by subcontracting to Sova.

Therefore she would refer the dispute to the Scrutiny Committee. But this will surely take months to report, whilst further job losses in refuse collection are announced and the recycling site workers continue to see their pay and conditions attacked further.

The council later refused to discuss even an extremely moderate motion put by the Green Party, which merely expressed 'disappointment' at the level of cuts to environmental services in Sheffield, a feeling which the sacked Sova workers have long since surpassed.

The behaviour of the Labour councillors, especially the 14 that are GMB members, doubtless shocked many in the public gallery.

It is more obvious than ever that Labour have no intention whatsoever of acting as an effective opposition to the Tories - their behaviour has only hardened the resolve of the strikers, who now see the council as tacitly supporting the Veolia and Sova bosses.

The workers at the Dump-It sites have lined up further strike action, which will continue to be solidly supported by Sheffield Socialist Party.

The snubbing of any demands which the strikers have made means that the strikers will need urgent financial support if their victory is to be assured. Donations need to be collected from other unions and branches to sustain the strike.

A victory would give tremendous momentum to demands for the renationalisation of public services for the good of working people.