The attempt to crush the aspirations of the majority of Catalans for self-determination by the Spanish state - now headed by the Psoe-led government of prime minister Pedro Sánchez - has not succeeded but instead has ignited widespread anger. 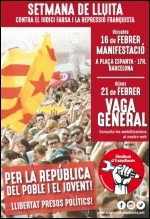 The proclamation of the Catalan Republic provoked an immediate, furious response from Spain's right-wing PP government as well as the ex-social democratic Psoe

Supporters of a socialist Catalan republic speaking in London

Supporting the general strike in Catalonia

A protest was held on Whitehall