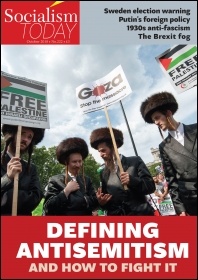 The Fog of Brexit

The UK is scheduled to formally withdraw from the structures and treaties of the European Union (EU) on 29 March 2019, less than six months' time.

But Brexit, a summary term for the renegotiation of British capitalism's treaty relations with the 27 other capitalist nation states of the EU, codified in thousands of laws, regulations, rules and directives, is anything but a formal - or smoothly-running - process.

A withdrawal agreement treaty between the UK and the remaining EU27 was due for approval at an EU heads of state council meeting in October, but is now likely to be postponed to an emergency summit in November.

The withdrawal agreement is planned to cover citizens' rights in Britain and the EU post-Brexit; how to avoid a hard border in Ireland; Britain's 'divorce payments' to the EU, agreed last year at £39 billion; and details of a transition period until a new relationship is inaugurated on 1 January 2021.

In accord with the Article 50 rules for exiting the EU club, "the framework for [the new] future relationship" has to be approved at the same time.

The withdrawal treaty incorporating the future relationship framework, once agreed by the EU heads of state, will then be put to a vote in Westminster.

It is conceivable that a parliamentary majority could be cobbled together for a version of Theresa May's 'future framework' plan announced at the prime minister's Chequers residence in July, with EU27 modifications consolidating its already clear character as a Brexit-in-name-only.

One EU27 demand could be to extend the proposed EU-UK free trade area for food and goods to include the digital economy and services, which increasingly are more profitable than the manufactured products they are based on.

Of the £2 billion defence and aerospace revenues booked by Rolls Royce in 2015, for example, 61% came from servicing rather than sales of original equipment.

But with ideological Brexiteer Tory MPs already declaring against Chequers even before any further concessions to the EU27, there will not be sufficient support for the government's proposals from the Tory benches alone.

The labour movement should oppose the Chequers plan, which has been drawn up to defend capitalist interests.

Its commitments include, for example, maintaining "a common rulebook for state aid" with the EU, building in regulatory impediments to even the modest state intervention and public ownership policies in Labour's 2017 general election manifesto.

These could not prevent a future Corbyn-led government, backed up a mass movement, from implementing socialist policies in defiance of the 'common rule book', but they would create the prospect of distracting legal battles.

Consequently, Jeremy Corbyn should stand firm and refuse to support the government if any version of Chequers is put to a parliamentary vote.

The Blairite remainers in the Parliamentary Labour Party, on the other hand, would have no problem voting with May against a Labour whip, if they conclude that a more thorough rolling back of the 2016 referendum result - or a complete reversal - is not feasible.

Forcing Chequers through on this basis, however, could be the trigger for the long-gestating splits within both Labour and the Tories to materialise, opening up a whole new situation in Britain.

A Tory split could be the basis for a new right-wing formation of a far more serious threat than has been posed to date by UKIP or other forces.

A Rees Mogg-Boris Johnson party would not be 'fascist' - scientific analysis and terminology are important, as other articles in this edition of Socialism Today demonstrate - but a dangerous right-wing development nonetheless.

It would position itself to feed on a new economic crisis, inherent in the situation facing global capitalism in the next period, by blaming a 'botched Brexit'. It could only be effectively countered by a working-class, socialist opposition.

And there will be new opportunities arising from the capitalists' Brexit divisions to create such a force.

Ejecting the Blairites who vote with May would be a big step towards completing Labour's transformation into a fighting, democratic workers' party, within which the idea of a socialist programme to meet capitalist crisis could rapidly win mass support.

The fear of precipitating these developments will be an important factor in the calculations of the ruling classes of both Britain and Europe as the autumn dramas approach.

Another scenario, therefore, is that the coming EU summits will produce a so-called 'blindfold Brexit' withdrawal treaty rather than attempt to conclude agreement on a modified Chequers plan.

This would mean a vague EU summit declaration promising a 'deep and special' future relationship (as part of the formal withdrawal agreement treaty), but deferring any details to negotiations to take place during the transition period after March 2019.

Even this is not guaranteed. British capitalism would begin paying the £39 billion divorce settlement for the privilege of starting negotiations with the EU after March 2019 almost from scratch, as 'a third country'.

During the transition, moreover, EU rules and directives would still apply. New ones - perhaps an EU27 regulatory grab at the UK's Crown Dependencies and Overseas Territories tax havens? - could be introduced, a section of the British capitalists will fear.

Within the EU27 there is also opposition to a withdrawal agreement that defers everything, with the prospect of never-ending negotiations.

The 31 December 2020 deadline for the end of the transition period was agreed to prevent Brexit over-running the next EU budget-making process, which will have to deal with the delicate task of making up the billions in lost net contributions that have come to the EU from Britain, the EU's second-largest economy. And then there is Northern Ireland.

Against this, however, is the mounting concern of the ruling classes of Britain and Europe of a 'no deal' Brexit.

If there is no withdrawal treaty, after March 2019 the UK will no longer be bound to the obligations in the EU treaties.

But the EU27 will also not be bound by their obligations to the UK. While there is no little scaremongering about the consequences, such an outcome could only be the result of an acrimonious breakdown of negotiations, after which - particularly if it coincides with a new downturn - none of the putative 'cliff-edge scenarios' could be ruled out.

The 19th century Prussian military strategist Carl von Clausewitz wrote of "the factors on which action in war is based" being "wrapped in a fog of greater or lesser uncertainty".

Brexit too has generated an enormous fog to hide the conflicting interests, both material and ideological, between the British capitalist class and their EU 'partners', and between the different economic and political fractions within the capitalist classes of all the 28 EU nation states.

Above all, it has obscured the most fundamental clash of interests, that between the capitalists as a whole and the working class. The task of socialists is to point out this irreconcilable gulf at each stage and put forward an independent working-class programme.

This means explaining the anti-working class character of the EU bosses' club and its policies but without bolstering illusions in capitalist alternatives.

In this respect, the Morning Star's attempt (13 September) to answer the latest disinvestment warning by the Jaguar Land Rover chief executive is a model of what not to do.

Not even raising basic socialist demands, like opening the books to trade union inspection or nationalisation, they argue instead that "new opportunities to promote exports after Brexit could prove beneficial for companies willing to seize them instead of peddling the same old doom and gloom", completely blurring the class lines.

It is necessary to repeat again. Neither a reversal of the 2016 referendum result nor a capitalist Brexit - blindfold, soft, hard, or no deal - can meet the interests of the working classes of Britain and Europe.

The EU is a bosses' club, designed to be 'beneficial for companies'! The economic outlook for British capitalism in a global downturn will not be one of 'new export opportunities', in or out of the EU treaties!

There is still time for the labour movement to clear the fog of Brexit. But only by fighting for a socialist and internationalist alternative to the EU and to capitalism across the globe.