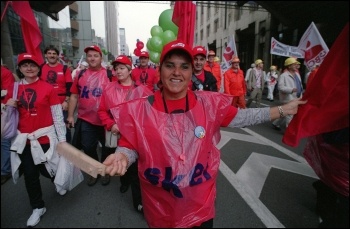 'But the EU is at war on us' exclaimed a number of Greek workers when reacting to the European Union (EU) being awarded a Nobel peace prize.

The EU leaders, along with those of the IMF, are part of the hated 'Troika' of capitalist institutions that is insisting on the austerity measures presently raining down on Greece's population.

In that country 68% of the population now lives at or under the official poverty line, one in four workers are unemployed.

In Spain too, one in four is out of work and youth unemployment in both countries has soared shockingly to over 50%.

Increased emigration from the recession-mired countries Greece, Portugal, Ireland and Spain - among others - is a graphic indication of the desperation and daily struggle of many people to make ends meet.

The suicide rate has also risen considerably. And now the largest European economies are again weakening, including France and Germany.

No desperate accolades from Nobel or anywhere will stop this present decline or shore up the EU's biggest faultline - the eurozone crisis.

The IMF has recently admitted that the impact of austerity drives on economic growth could be worse than it previously thought.

Greece shows no prospect of avoiding an exit sooner or later from the zone; despite the rounds of bailouts and brutal cuts its public debt is larger today than at the start of the crisis.

An ultimate Greek exit will create further and deeper turmoil in the eurozone and beyond and will increase the pressures on the other struggling economies within it.

Media commentators speculate about who is to blame for this disastrous scenario - why a project that began with great promises of prosperity has sunk into disunity, clashes and unmanageable crisis.

The economies across the zone varied significantly in their features, strengths and weaknesses, yet were confined to a straitjacket of a single currency and interest rate.

This was workable to some extent in a period of economic growth but was bound to come under insurmountable pressure in a recession.

Reflecting the depth of the crisis, Europe's ruling classes and governments now have no achievable solutions to the crisis to offer and are deeply divided within and between themselves on what to do.

Some argue in vain for a new EU constitution with more central powers and an end to national vetoes on treaties.

Others want a looser relationship with the EU or to be out of it altogether. All reveal their bankruptcy - they cannot deliver stability and growth.

However, their floundering is not taking place in isolation. Millions of working class and middle class people have participated in strikes and demonstrations against the onslaught on their living standards that is being spearheaded by the EU chiefs.

During the last few weeks alone there has been another general strike in Greece, hundreds of thousands on the streets of Portugal and Spain and tens of thousands demonstrating in France, Germany and elsewhere.

The EU is increasingly being seen as the bosses' club that it is - that has enshrined in its constitution the rule of the market and the attacks that flow from that.

In this situation, the leaders of the trade unions - the organised workers' movement - have a responsibility to lead a challenge to the cuts-making governments that will actually force them to retreat.

Much more is needed than strikes and protests called just to 'let off steam' - impressive though many are - as has happened too many times.

The CWI calls for trade union movements throughout Europe to adopt determined opposition to all the attacks on living standards, escalating action if necessary.

Their strategies must have the serious intention of removing any government that sticks to a path of making ordinary people pay for the economic crisis.

Struggles should be coordinated to have greater impact, when possible, ie mass strikes and demonstrations in different countries taking place on the same day, as will happen across Spain and Portugal on 14 November.

This can prepare the way for the organisation of a powerful one-day Europe-wide general strike.

As well as such action, urgently needed are workers' parties that can offer a socialist political alternative to the capitalist parties across Europe.

There is a warning to be drawn from the rise in support for the far-right Golden Dawn in Greece: dangerous, divisive ideas can be turned to in desperation if a viable progressive path isn't clear.

However, also in Greece the rapid rise in support for the left-wing alliance Syriza shows the scale and speed with which a party opposing austerity can gain an audience.

This can be echoed by new workers' formations elsewhere in Europe in the coming period.

They will be attractive if they put forward socialist ideas that lay bare the failings of capitalism and offer programmes that boldly pose a real alternative in workers' interests.

Such programmes should include increasing taxes on the rich and top companies and banks, and refusing to pay back the massive sums of debt 'owed' to them at home and abroad.

Let big business and their friends in finance pay for the crisis that is of their making, not ordinary people!

Socialist programmes should also include the nationalisation, under democratic workers' control and management, of the major companies that dominate the economy.

These measures would provide the means to massively invest in jobs and services. In Greece, where the crisis is the most acute, support for such a programme is growing.

What about the EU? Opposing the capitalism-serving institutions that make up the EU certainly doesn't mean rejecting international links and cooperation between ordinary people.

The key questions are: What is the character of the institutions, who is controlling them and in whose interests are they acting? The EU is controlled by 27 of the European capitalist ruling classes and flowing from this they act in the interests of big business and the rich.

Socialist societies across Europe would be able to democratically elect representatives to an entirely different type of institution - ones serving workers' interests.

This would be the basis for a European socialist confederation - an alliance of socialist states - that could democratically, and with full accountability, enable economic, environmental, social and cultural cooperation in the interests of the overwhelming majority of people across the continent.